Parents Call for Resignation of Osseo School Board Member

Parents of the Osseo School District are calling for a school board member to resign after she made social media comments that parent say do not reflect their views. 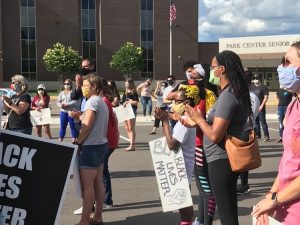 “We just want the district to know that there’s a large group of us that really believe it’s not enough to just not be racist, but that we need to be anti-racist,” explained Jessica Westberg, a parent in the district.

Westberg said the outcry comes after seeing school board member Heather Douglass support a GoFundMe effort for the family of the truck driver who nearly ran over peaceful protesters last month on Interstate 35-W.

“We had students from this very district that were on that bridge and that had to jump out of the way. We felt that support was extremely insensitive,” Westberg said.

The GoFundMe drive would help cover legal expenses for the trucker’s wife. In part, it states that the trucker’s “pregnant wife had to leave the house and hide because of phone calls with threats from people who stole (the trucker’s) phone from the truck.” 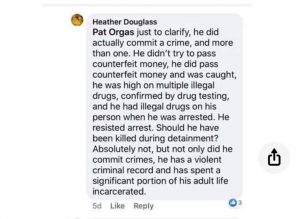 “I know that no apology will take away the pain that others are feeling and I also understand that my own experiences contributed to my comments that were not shared at the time,” Douglass said.

She added, “I do support justice for George Floyd. I’m deeply horrified by the way he was murdered and there’s no justification for that. I support George Floyd and all students of color and the pain they’re feeling to this murder.”

CCX did not get parent reactions’ to Tuesday’s apology. However, parents say the first apology on social media was equivocal.

“It didn’t really speak to those students and the trauma they were experiencing,” said Westberg. “She sort of dug her heels instead of accepting that hey what you did was hurtful to the students you’re representing.”

Families assure that they won’t be going anywhere if Douglass doesn’t resign.

“I think at the end of the day we all show our voices in what we want when it comes to election time,” Westberg said.

Last week, as reported by CCX News, another Osseo School Board member, Jessica Craig, abruptly resigned over what she described as a “woke-scold” culture in the district.

On Tuesday, two school board members, Kelsey Dawson Walton and Jackie Mosqueda-Jones, proposed several anti-racial policies that failed to pass. The majority of the board agreed it needs to go through a process before the green light is given.

However, some of the proposed policies are within the purview of management, while others are within the board arena and may be incorporated into the work of Osseo Area Schools’ new strategic plan.