A member of the Osseo Area School Board has abruptly resigned, two years before the end of her term, citing the “current climate and culture under this school board and superintendent.”

A district spokesperson says that Jessica Craig submitted her written notice of resignation from the board on Friday, effective June 19, 2020.

The announcement initially came from a Facebook post Thursday evening from the account of ‘Jessica Craig for District 279,’ which has since been deleted. In the post, Craig cites the “woke-scold” culture and describes how it has “zero place in public education.” 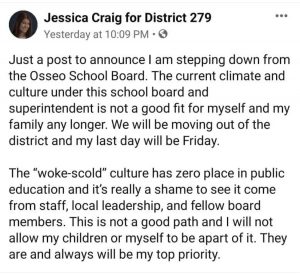 Craig was first elected in 2014 and has served on the board since January 2015. Her seat would have been up for re-election in 2022.

District officials say the agenda for the June 23 school board meeting will include a resolution to authorize a special election on Nov. 3 to fill the remaining two years of her term.

Email messages sent to Jessica Craig asking for more detail as to why she submitted her resignation were not immediately returned.