The Palmer Lake VFW delivered about 80 pillows to deployed National Guard members at the Arden Hills Armory this week. 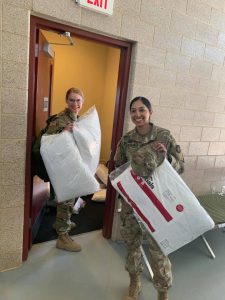 “They had people planned to be there a day and now would be there a lot longer, so they don’t have simple things like pillows,” explained Scott Hanson, a district commander for the VFW. “So I went to Target and bought all the pillows they had.”

Hanson says he delivered the pillows to the guardsmen, who were very appreciative.

“They were very excited. A lot of them hadn’t slept in a few nights,” said Hanson.

A clean, new pillow made all the difference.

The Palmer Lake VFW is also collecting items like snacks and toiletries, but they ask that you call them before you deliver them to their Brooklyn Park location. You can learn more on their Facebook page.