Outgoing Hennepin County Commissioner to Run Can Do Canines

Hennepin County Commissioner Jeff Johnson is retiring from the county board to run New Hope-based nonprofit Can Do Canines. Johnson announced in 2016 he would not seek re-election for his District 7 seat. District 7 serves many northwest suburbs, including Maple Grove and northwest Plymouth in the CCX News viewing area.

Johnson has served on the Hennepin County Board of Commissoners since 2009. He will leave the county board in early December.

“It has been a tremendous honor to serve my constituents on the board for nearly three terms,” Johnson said in a statement to CCX News.

During his time on the county board, Johnson made it a priority to focus on fiscal restraint, trying to ensure that programs produce measurable positive results.

“While I’ve certainly raised a lot of questions over the years about programs and spending priorities, I’ve found the commitment of our staff and the quality of county leadership to be exceptional,” said Johnson.

Prior to serving on the board, Johnson was a member of the Minnesota House of Representatives from 2001 to 2006. He also was the Republican nominee for Minnesota governor twice. 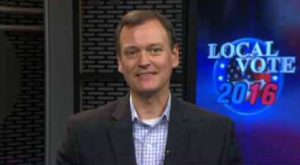 “Time to Move On”

Johnson will become executive director at Can Do Canines, which raises and trains service dogs for people with disabilities.

Can Do Canines was founded in 1989. It’s the largest service dog organization in Minnesota. Service dogs help people with a variety a disabilities and health issues, including hearing loss, mobility, seizures, diabetes and autism.

“My time in government and politics has been exciting and meaningful to me, but it’s time to move on and use my experience and the talents God has given me in a different way. I couldn’t be more excited to lead Can Do Canines into its next season,” Johnson said.