Brooklyn Center police continue to investigate a homicide that occurred midday Wednesday outside the Speedway gas station off Brooklyn Boulevard. One person was killed, said police, who emphasized the shooting did not involve any officers.

The daytime shooting prompted nearby roads and schools to be blocked off for most of the afternoon. Schools including Palmer Lake Elementary and 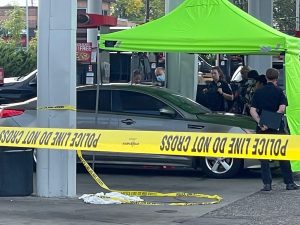 St. Alphonsus Catholic School were on lockdown for an extra preventative measure.

Eyewitness Mitch Whitley was right beside the car that the gunman shot up several times through the windshield.

“I was pulling into Speedway and I heard about 12 gun shots and I got out of my truck. I see the guy next to me on the other side of the pump fall out of his car.”

Whitley and many other individuals around the vicinity of the gas station were able to immediately call 911 for help.  It’s another shooting in the city that has the community emotional.

Authorities have not yet identified the victim. A medical examiner was on scene by mid-afternoon.

Currently, there are two suspects in custody who may be connected to the shooting, police said. Brooklyn Center police also say this is likely an isolated incident and there is no immediate danger in the surrounding area. Speedway gas station is currently closed. 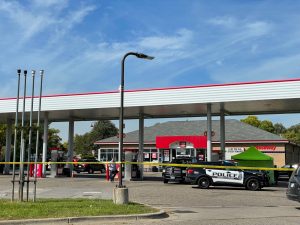