The nonprofit On Stage led a discussion at Hennepin Technical College about Yellow Three Theatre’s “Skeleton Crew.” By introducing the students to the material in the play, the nonprofit hopes to help cultivate a younger audience for local theater.

“It’s a way to promote local theater to colleges and universities to a non-traditional theater audience,” said Lucas Erickson, project manager with On Stage. “We tie it into the curriculum that’s happening in the classrooms.” 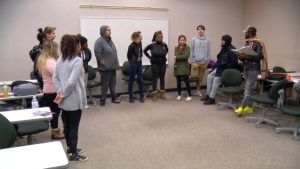 Erickson says theater audiences are growing older and for younger audiences to become engaged in theater, they must first connect with the content. So, he visits classrooms, like a sociology class at Hennepin Technical College. First, he introduces students to the play and then encourages students to talk about it.

“Usually when we go into classes, we assume they know nothing about the play,” said Erickson. “Sometimes they haven’t seen theater….ever.”

Since “Skeleton Crew” is about auto-workers in Detroit at the beginning of the Great Recession, students spoke about their family members who worked in factories.

“This is a way to make [the story] more relevant to people who haven’t seen theater,” said Erickson.

Before “Skeleton Crew” is over, Erickson will have visited 16 colleges and universities and interacted with 400 students. He estimates a third of the students may purchase tickets to see the play, but that isn’t the end goal. The hope is this experience sparks a curiosity where students will go back out later and discover a local theater.

Since 2016, the program, On Stage: Creating a Dialogue Around Live Theater has partnered with eight theaters in the Twin Cities. They’ve promoted 14 plays.  Springboard for the Arts sponsors the program.  The 14 plays that On Stage discussed have covered topics like gender and racial inequity, LGBT discrimination, cultural dispora, alienation and aging. The nonprofit partners with small and mid-sized theaters that often don’t have the resources for their own outreach efforts.  Learn more about On Stage by clicking here.