Yellow Tree Theatre presents Skeleton Crew. Skeleton Crew is about work, or the lack of it. The play is set in Detroit during the down turn of the American auto industry.

“The plants closing, especially in Detroit, or the plants closing and moving out or going down south or outsourcing, it was devastating in particular to the African American culture,” said director Austene Van. 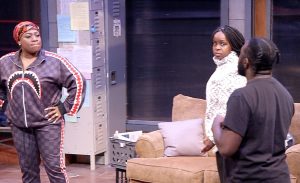 Each one has a lot riding on the ability to keep their job at the auto plant.

“I play the role of Reggie. I’m the foreman in this factory. And Reggie is somebody who’s a family man. He has a lot at stake with being a foreman and knowing that a lot of factories around them are closing and shutting down,” said Darius Dotch, who plays the role of Reggie.

“I play this young guy by the name of Dez. He’s a very hard worker, but also someone who is understanding of the streets and what his environment is like around him. He has a lot of dreams to do more and wants more,” said Mikell Sapp playing the role of Dez.

Each character is compelling and the audience is drawn into the unfolding drama.

“There is Faye Davison who is the OG or the old head. She’s been there 29 years almost 30 years. And then there is Shinita, who is a single mother. We often talk about you should have pride in everything you do that’s who Shinita is in a nutshell.” said Van.

The play contains adult themes and some language that may be considered strong, so it’s not a show for small children. It is a gritty, very human story about tenacity and bearing up under pressure.

For other stories on past plays at Yellow Tree go to CCX Media.