In person classes may not be taking place for theater students at North Hennepin Community College thanks to COVID-19, but that didn’t prevent them from putting together a fall production.

“Since so many students were either not available to audition or had taken time off because they had work or there were COVID emergencies and whatnot, it was difficult to get a cast together,” said Mike Ricci, the NHCC director of theatre. “So I decided that I would enroll my acting class. They were sort of “volunteered” to be in the cast. I said, ‘This will be a great project for all of you guys. You’re gonna learn about acting and how to do a show and whatnot.’”

Ricci spent the last two months helping his students rehearse for a virtual performance of a play called, “The Wellstone Project.” 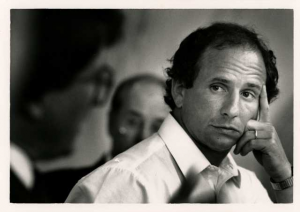 Paul Wellstone represented Minnesota in the United States Senate from 1991-2002.

The play was written and composed by alumni of North Hennepin’s theatre department, and takes a look back at the life and legacy of former Minnesota Senator Paul Wellstone, who died in a plane crash in 2002.

The show takes place entirely on Zoom and is available for audiences to watch the next two weekends, starting on Friday, Oct. 23.

“I was really pushing for the show to be done, especially now,” Ricci said. “We planned it to happen just before election, and of course Paul Wellstone’s legacy is one of political activism and social activism, and we wanted to honor that legacy. Especially a lot of the current students really don’t know about his work. They don’t know about the man. They don’t know what he stood for, and what being a progressive is all about.”

There is no fee to watch the show, but they’re asking for people to contribute donations to the Paul and Sheila Wellstone Scholarship Fund at North Hennepin Community College.

For more information on how to watch the play, you can go to the NHCC Fine Arts website.