Moving into a new home requires some basic necessities.

And in a Brooklyn Park warehouse on a recent Wednesday, Sonia Anunciacion acted as a personal shopper of sorts to Sumaia and Zahra Haidari.

The two sisters were invited to this warehouse-turned-marketplace to help them get a fresh start on a new life.

“Everything in this warehouse has been used to fully furnish homes,” said Anunciacion. “So there’s beds, couches, tables and culturally specific items as well.”

Anunciacion works for the nonprofit group, Alight, which is leading an effort to help Afghan refugees resettle in Minnesota.

“Everyone’s life is in danger in Afghanistan,” said Anunciacion, the resettlement project lead. “Especially if you’re a woman, a child, or anyone with an education.”

The items in the Alight marketplace, which were procured through donations and fundraising efforts, are exclusively for those fortunate enough to escape Afghanistan.

“Everyone wanted to leave. Their lives were in danger,” Sumaia said (using Anunciacion as an interpreter). “Especially for women and those that wanted education or to work.” 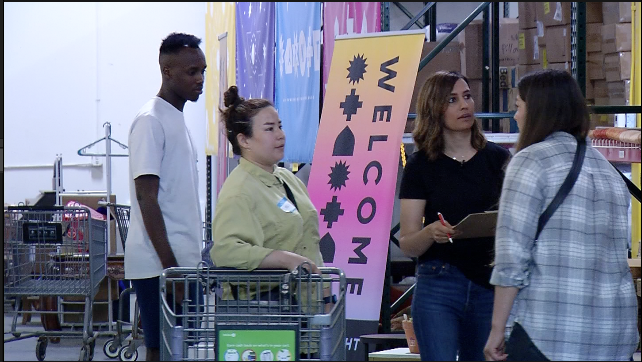 Sonia Anunciacion (in black) takes Sumaia and Zahra through the Alight Market.

Sumaia and Zahra both participated in martial arts in Afghanistan, and because they’ve been traveling with their martial arts group, they had the necessary paperwork to escape when the Taliban took over the country

Speaking the language is one of the many challenges that comes with fleeing your home country. Finding work and being so far away from loved-ones are other things that have been hard during this transition.

“[Sumaia] said it’s very difficult leaving her family,” Anunciacion said. “She’s never made such a long journey away from her family. She’s the youngest. She’s the baby, and she misses her family dearly.”

The hope is that one day they’ll be able to bring their family to the U.S. But first, there’s the matter of getting what they need to help make their apartment in Minnesota feel like home.

“If [Sumaia] can build a life here and get that education that she’s looking for, and a career, then yes she will stay in Minnesota,” Anunciacion said.

Since moving to Minnesota, the sisters have been able to secure jobs at the airport.
Meanwhile, Alight is looking for help in their Brooklyn Park warehouse.

If you’d like to donate items or help organize inventory, you can go to the Alight website for more information.