Brooklyn Center middle and high school principal Josh Fraser sat down and talked about what a year that included a pandemic, the Daunte Wright police shooting and then ongoing protests happening blocks from the school.

He describes the main theme as “trauma.”

“It’s trauma that has existed for years and it just so happens it’s local this time around,” said Fraser. “To go along with the pandemic, there’s this exhaustion about everything. It’s not just about school, it’s about society. We are just offering spaces for kids to deal through some of that trauma.”

After the Daunte Wright shooting, the school’s Blue Barn became a collection and distribution center, as people donated items for families in need.

“I can’t express in language how proud I was just to be a part of something in trying to find a silver lining in the tragic killing of Daunte Wright,” said Fraser. “We opened up our space and we had no idea how it would take off.”

Fraser goes on to say that distribution center became the school’s curriculum, as students and staff worked together to accomplish something good. 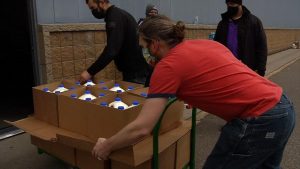 Volunteers rolled in boxes of donated milk into Brooklyn Center High School’s gym in the days following the Wright killing.

But the action didn’t stop there.

Fraser said students participated in healing circles, but wanted to “do more than just heal.”

Mayor Mike Elliott and city council members met with students to talk about those demands.  Fraser is also proud of students spending time outside of school crafting questions and thinking about change.

“Students would be the first ones to tell you that we have all of these organizations and formal leadership opportunities and captains of sports, but there’s often a bunch of students who don’t have the opportunity to step up into leadership in a formal way,” said Fraser.

And did students step up to try to create change?

“Boy have they ever,” said Fraser. “Students are showing up on days they might not be in school, when they are usually online in order to step up and create change.”