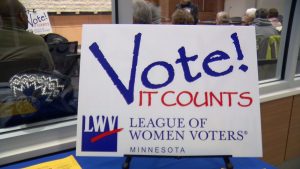 It’s the first presidential nominating primary in Minnesota in nearly 3 decades. But so far, early voting has produced low voter turnout, and for a reason.

Residents are learning that their votes will be recorded. Current law requires the state secretary to give major parties data of the party you voted for, that does not include the specific candidate you selected.

Parties can use that data to build voter outreach like calling and mailing residents. Currently, there’s no law that restricts what parties can do with that information.

A group of bipartisan lawmakers, including DFL Senator Ann Rest of New Hope, wants to enact a bill to protect the privacy of Minnesotans who vote in the primary.

“I think our law that’s proposed, with this bill that’s supported by Secretary Simon is about as clean cut as you can get. You can’t use it for anything other than determining the delegate’s strength and that can only happen at the national level,” said Rest.

Senator Rest believes the legislation can be put in place for the March 3rd primary.

Local lawmakers add that the chair of the two parties get to choose the candidate name on the ballots. The only name appearing on the Republican Party will be Donald Trump. However the DFL submitted 15 names and then a write-in.

Officials say even if a candidate drops out, the ballots don’t change after December, so keep knowledge of candidates that are still in.

It’s also important to know the bill would create an opt-out option for the public to be excluded from any list. Voters could request an opt-out form before they fill out a ballot.