The presidential primary is only a month away in Minnesota. Despite the large pool of democratic candidates running against President Donald Trump, local city clerks still expect a low turnout in the primary. 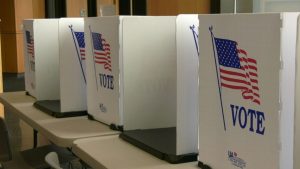 City clerks say there’s a few reasons they believe people won’t be showing up at the polls during the primary. One is because residents may not be aware of it, due to the fact that it’s the first primary in 3 decades. The second is because the party you vote for is public.

“It’s going to be given to the parties. And then they can do in turn what they want. So right now, there’s no limitation on what they can do with that information,” said Brooklyn Center City Clerk Barb Suciu.

Major parties can use the database to build voter outreach including calling, mailing and door-knocking.

Although voter turnout is expected to be low, city staff are ready in case things take a turn.

“We are prepared and ready to go. Our judges have been trained; we got staff here for the absentee voting no matter what the turnout is, whether we get surprised here and get an uptick in the turnout, Plymouth is ready to go,” said Plymouth City Clerk Sandy Engdahl.

Hennepin County has issued more than 13,000 absentee ballots. So far, they’ve received and accepted about 5,000 by mail and in-person

The deadline to preregister is next Tuesday. Voters have the option to register at their polling place on presidential primary election day, March 3rd.