Dan Boyum, city engineer, said there’s not enough indoor storage to house 173 vehicles and equipment. Currently, there are several vehicles stored outdoors. Boyum said parking vehicles outdoors can delay emergency response times during the winter. He said staff has to de-ice and clean the snow off from the vehicles before calls.

“The city considers public works staff as first responders,” said Boyum. “Whenever there’s issues of snow or ice storm, water main breaks and sanitary sewer backup, public works people need to get out there and clean that off.”

By storing vehicles inside, Boyum said equipment also have an estimated 2.5 years of extended life.

Bernie Weber, the public works director, said the mechanic bay doesn’t have air conditioning. He said it makes for hot and uncomfortable working conditions for mechanics. Weber said security is also a problem since gates are left open.

“We’ve had residents driving through parking to look for salt. We’ve had just unwanted visitors driving to parking lot to drop garbage off,” explained Weber.

Weber said the city is looking to add new security cameras and gates.

“We are proposing to bring fencing area past the doors so gates can be closed 24/7 and only city staff will be allowed in the gates,” Weber said.

The city council is discussing ideas including a project with two phases. The first phase would include taking an existing sand storage and turning it into storage for vehicles and 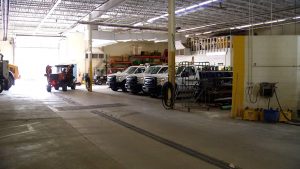 equipment. The sand would be stored in a newly built 3,000-square-foot building outside the existing facility.

“Since 2017, we’ve been putting money from the central garage fund in the bank. Right now we have $1.6 million in the bank to do the stuff we’re proposing to do within the next work session,” said Weber.

The  second phase includes a 20,000-square-foot storage expansion. The goal is to get as much of the future and existing equipment indoors. City staff say details are still being fine tuned, but phase one will be proposed mid-December at the next work session.