The city of New Hope is looking into expanding and renovating its public works building. The city council members approved a feasibility study at their Aug. 24 meeting.

The public works garage was built in 1979 and has had several additions since then. The garage services the city’s fleet of vehicles, which includes 173 pieces of equipment that range from police vehicles to snowplows. It also serves as storage for many city vehicles. 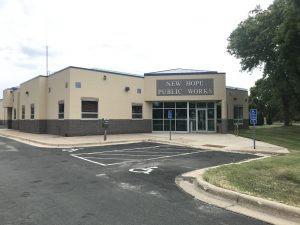 Currently, several vehicles are stored outdoors. A 20,000 square-foot expansion would move those vehicles inside and make several improvements to the current building which includes storage space, new service doors and window panels, and air conditioning in the mechanics work bay. Improvements outside of the building could include more storage, a fueling station where vehicles could pull-though to get gas, and new security gates.

However, price could be an issue. The feasibility report identifies an estimated project cost of $6.4 million and it also lists a reduced project scope of $1.5 million. The city started setting aside money for public works building improvements in 2017, but city manager Kirk McDonald says they don’t have enough money set aside yet.

“When they were doing this report, I shook my head and said we don’t have that much money,” said McDonald. “I want you to put your priorities into a reduced space and that’s what they did.”

Several council members also remarked on the price and an interest in keeping taxes low.

“We have some bonding and tax fatigue from our residents,” said Cedrick Frazier, council member. “We hear a lot of it.”

Council member Jonathan London mentioned most cities in rural Minnesota do not have indoor storage and alluded to that being a cost-cutting measure.

“We’ve seen taxes go up significantly in this city, so I want to make sure we actually have a problem that we’re trying to solve and that this will solve it,” said London.

Another issue that came up during the discussion is if the improvements will make the building safe for employees, given the recent unrest. Currently, the area is gated.  Security improvements would include new cameras, gates, and enclosing the mechanics bay.

The issue of security hit a chord with council member John Elder, who also works for Minneapolis Police Department. During the New Hope City Council meeting on Aug. 24, there was more looting and vandalism happening in downtown Minneapolis.

“We are a second-tier suburb. Wake up,” said New Hope City Council member John Elder. “The threats are real.”

Public Works Director Bernie Weber affirmed that they have had incidents of residents driving through public works.

“So there is fear,” said Weber. “Like John Elder said, we have concerns.”

Council members were invited to come take tours of the current public works facility. The council could take action on the expansion as early as October.