The New Hope City Council is expected to vote later this month on plans for a new charter school. The proposal would convert space at 47th and Zealand Avenues into a new K-8 dual Spanish-English immersion school.

New Hope Church currently owns the property. According to officials with Escuela Exitos, the school would lease the building from CSDC Facilities Corporation, which would buy the property. Under state law, public charter schools cannot own their own building.

Luis Vanegas, executive director of Escuela Exitos, says about half the school would be Spanish speakers and the other half English speakers. He told members of the New Hope Planning Commission that there are “long waiting lists” for this type of immersion option, which allows students to learn both languages from each other.

Escuela Exitos uses an individualized learning model for each student. Vanegas said he also expects the school to participate in the United Nations sustainability goals. The school will collaborate with students around the world, including China, Chile and Columbia, Vanegas said.

The school plans to serve 165 students for the upcoming school year. Enrollment would cap out at 390 students by the 2023-2024 school year. 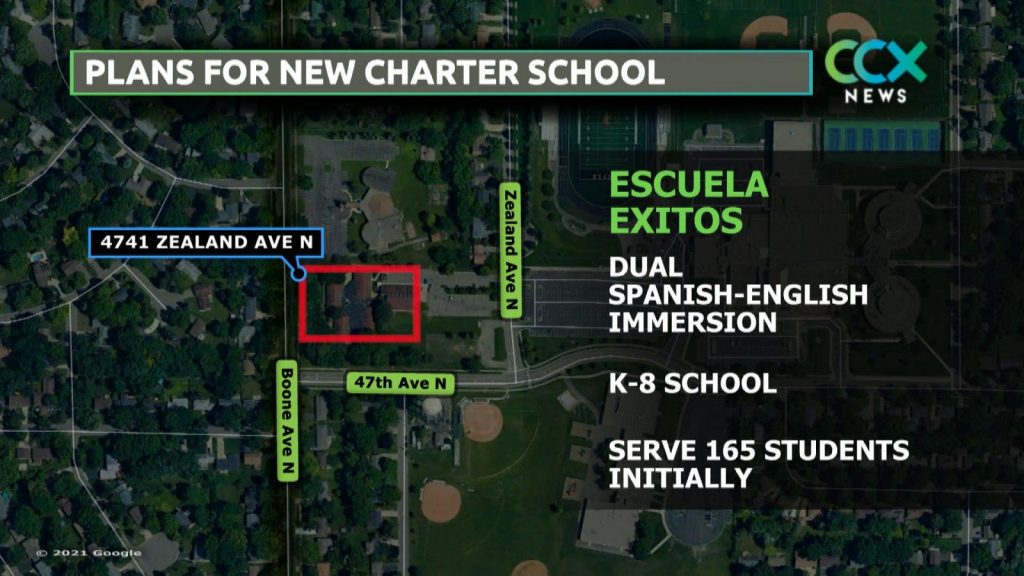 The school would be surrounded by House of Hope Lutheran Church to the north, residential properties to the south and west, and Cooper High School to the east. While much of the site redevelopment would consist of interior renovations, there would be parking changes and a driveway addition off of Boone Avenue to accommodate buses.

Vanegas said about 85 percent of students would be transported to the school via bus, while another 10 percent by vehicle. New Hope Planning Commission member Jim Brinkman raised a concern about the student drop-off process, saying there could be significant safety issues with students exiting vehicles and walking between cars. Vanegas said staff would be assigned to ensure an efficient drop-off process.

“We’re going to be having staff members that are responsible for opening the left doors so that students can exit from the backseat toward the school,” said Vanegas.

Vanegas said he expects 26 pickups and drop-offs by car each day.

“We have made the applicant aware of that discussion, but nothing is certain as of right now,” said Jeff Alger, New Hope’s community development specialist.

The New Hope Planning Commission recommended approval of the school proposal on April 6. The New Hope City Council will have the final say; it’s expected to vote April 26.

“I think it will be a great addition,” said New Hope Planning Commission Chair Scott Clark.