Protests come in many forms. But a house near 65th and Xerxes in Brooklyn Center pushes past the boundaries of what others believe is appropriate.

The property is covered in the acronym for Black Lives Matter, along with a profanity-laced message deriding law enforcement.

“It’s not spray paint. I didn’t tag it with spray paint,” said Shivon Terry-Maxwell. “I rolled a roller and painted it pretty.”

Shivon Terry-Maxwell has been the homeowner of the Brooklyn Center property for the last four years.

“I’m sending a proud, strong message across America, obviously, that I’m not playing no games and leave me alone,” Terry-Maxwell said. “I don’t like the police and they need to leave me alone.”

She says she painted her property after police apparently raided her home following an arrest at a protest in Uptown Minneapolis last month.

“I’m a target, for no reason. I didn’t even do nothing,” Terry-Maxwell said. “So I decided to tag my house since they wanted to raid it.” 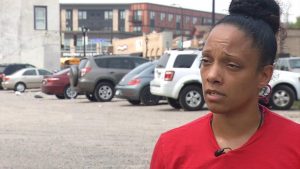 Shivon Terry-Maxwell owns the home near 65th and Xerxes.

CCX News tried talking to neighbors, but nobody wanted to go on camera. However, they mentioned they’re not sure why someone would want to do this to their own house. They also said they respect the homeowner’s right to protest, but the profanity is not appropriate for the neighborhood.

Meanwhile, people did weigh in on social media over the last couple of weeks. Yet despite the backlash, Terry-Maxwell is unapologetic and has no plans to paint over the messages, even after a visit from a city inspector.

“[The inspector] rolled his window down and he said, ‘maam,’ and then he opened his door — ‘We need to talk to you about the graffiti,'” Terry-Maxwell said. “Graffiti? What graffiti? These are tattoos on my house. My body’s covered in tattoos. [Louis] Farrakhan said I can paint whatever color house I like in America, right? I told him if he had a problem with it, talk to the Nation of Islam. And he pulled off.”

“We are working with the property owner and city attorney to find a path forward that brings the property into compliance while upholding the property owner’s rights,” said Meg Beekman, Brooklyn Center’s community development director, in a statement to CCX News.