Traditionally, home improvement projects have been associated with procrastination, at least that’s the case with Jeff Sisk of Minnetrista.

“Well it’s your perpetual honey-do list,” said Sisk, who was shopping for tile at the Menards in Brooklyn Park

But what he and many other people have discovered this year is that traditions don’t seem to apply to 2020.

“I’ve got a little bit of time on my hands and I’m at home more, so yeah, I’m doing some projects,” Sisk said.

When COVID-19 hit, staff members at the Brooklyn Park Menards say that plenty of homeowners decided to move home improvement projects to the top of their to-do lists.

“So that fence that’s out there that they’ve ignored for the last three to four years and said, ‘yeah I’ll get to it, I’ll get to it,’ all of a sudden, now they’re home and they’re watching it every day,” said Craig Carson, general manager of the Brooklyn Park Menards. “All of a sudden it becomes a high priority.”

Not only did it become a high priority, Carson says that many people decided to tackle these projects on their own.

“We’ve got tutorials on Menards.com. You know, are they [are] watching those and saying, ‘I can do that,’” Carson said. “And then making that decision, they come in here, they start talking to people, they get that gumption that they can do it, and then they tackle it.”

Sales up in the lumber department, along with prices 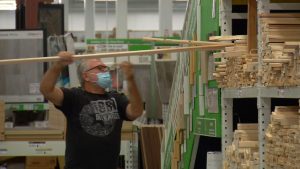 A customer at the Brooklyn Park Menards shops for lumber.

The decision to tackle those projects brought many of those customers to the lumber department for, well, any number of things. Decks, patios, retaining walls, fire pits, and fences are just some of the projects people took on.

And for the most part, he says people have been able to find what they need.

Yet during the height of the pandemic, a lot of the lumber mills shut down. While Menards stayed pretty well stocked, the price of lumber shot up. The National Association of Home Builders reports that the price of lumber increased by 80 percent since mid-April.

“I still keep getting the lumber in, so it’s out there,” Carson said. “It’s just, what are people willing to pay for it?”

There’s no word yet on when lumber prices will drop. But as long as we’re still dealing with COVID-19, staff members at Menards say they expect to stay busy as people continue to channel their inner do-it- yourself mentality.

“And the satisfaction of doing it ourselves is huge,” Carson said.