MnDOT: Expect Lane Changes for I-94 Construction Through Maple Grove

I-94 continues to get a MnDOT makeover in the northwest suburbs. A major road construction project that began a few months ago will upgrade a 39-mile stretch of the interstate between Clearwater and Maple Grove.

“This is just one leg of it,” said Dave Aeikens of MnDOT. “There’s actually four legs. At the Dayton Parkway interchange we’re building a new bridge working with the city of Dayton so people can have an on and off exit ramp there. That is underway.”

MnDOT has switched all I-94 traffic to the westbound lanes so crews can work on the eastbound part of the highway. Construction workers are rebuilding bridges, adding access lanes and improving storm drains. 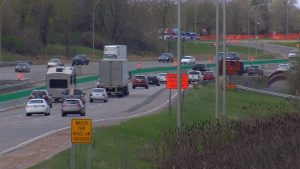 “They’re grinding up pavement,” Aeikens said. “They’re just doing a lot of work. Later in August we’re going to start doing some concrete pouring work. We’ve got a special device that we’re going to use to get the concrete over the highway and save us on the need to get trucks in there.”

I-94 getting new concrete

Another benefit of this construction project is that I-94 is getting new concrete for the first time ever – which dates back some 50 years.

“If you’ve driven on that stretch there between Maple Grove and 101, you know it’s pretty bumpy there,” Aeikens said. “That’s the original concrete. What we’re doing is called a concrete overlay. Just put another layer of concrete on top of it. It’s cheaper, will last just as long.”

The construction project began in the spring and is expected to be finished in the fall of 2021. According to Aeikens, crews will keep working in 2020 until the ice, snow and frigid temps return to the Twin Cities. 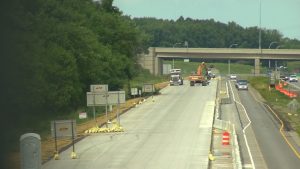 New concrete coming to I-94

The total tab for the I-94 improvements is $125 million. When completed this busy Minnesota interstate will be a much better road.