Minnesotans Head to Polls for First Election in COVID-19 Era

In this first election since the start of the COVID-19 pandemic, a variety of safety precautions greeted voters at a polling place in Robbinsdale — plexiglass windows, hand sanitizing stations and face coverings on everyone in the building.

“Voter safety and election judge safety is something we take very seriously,” said Robbinsdale City Clerk John Tingley. “We’ve been planning since May, really, how we’re going to be able to open up polling places for primary election day in August for COVID.” 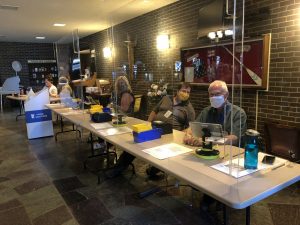 Workers at a polling place in Robbinsdale had plexiglass windows to separate them from voters.

The Minnesota Secretary of State has been pushing for voters to vote by mail this election season to help reduce the spread of the coronavirus.

As of Aug. 10, more than 423,032 Minnesotans have done just that, including 25 percent of registered voters in Robbinsdale.

But some preferred the in-person experience.

“For me it was a little bit about just getting out of the house, and it felt good,” said Kelsey Lawrence of Robbinsdale. “So, beautiful day to come out and vote.”

Robbinsdale resident Clayton Bradbury thought it was so important to vote that he took an Uber to his polling place.

“So I have an Uber to pick me up, take me to vote, I’m being very cosmopolitan today,” he said.

It’s just one of the many quirks on an election day that’s unlike we’ve ever seen, but it doesn’t end there.

“In this primary, who knows what we’re going to get,” said Hamline Political Science Professor David Schultz.

Schultz says that with the dramatic increase of mail-in voting for this primary, it’s likely that we won’t get the results on every race for several days.

“It’s not clear what the candidates are going to say at this point,” Schultz said. “The smart thing might be to say, let’s wait until the returns come in, but I don’t know if they’re going to do that.”

In Robbinsdale, City Clerk John Tingley predicts they’ll have a pretty good idea of who will win the city races.

“We’ll have most of the results tonight,” Tingley said. “We won’t have an official count until all of the absentee ballots are counted on Thursday or actually are tallied on Friday morning.”

State officials are asking for patience when it comes to election results. Voters we spoke with were just happy that they could still vote during a pandemic.

“Outside of it being a civic duty, I think if you want change it’s not enough to tweet about it,” Bradbury said. “It’s not enough to be an internet activist. You actually have to put your money where your mouth is, and I think the most effective way to do that is to vote.”