A Minneapolis man admitted in court Tuesday that he shot and killed Dattreas Stewart of Brooklyn Center during a drug deal last December. As part of the plea agreement, Giovanni Williams, 24, will be sentenced to 20 years in prison. 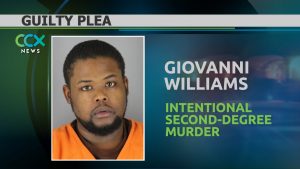 The criminal complaint describes the details of a drug deal that turned deadly. Police responded to the Pump n’ Munch gas station in Brooklyn Center around 9:15 p.m. on Dec. 11. They found Stewart in the front passenger seat of an SUV with a head wound. The complaint says his girlfriend was with him. Stewart died at the scene.

The complaint says the girlfriend had arranged with another person to sell an ounce of marijuana for $300 at the gas station. In court on Tuesday, Williams admitted he got into the back seat of the SUV with the intention to rob Stewart. But when Stewart pulled out a gun, Williams shot Stewart first, the complaint said.

Williams’ sentencing is set for Oct. 19.