Military Mom Returns from Deployment to Surprise Kids at School

Every day, teachers develop lesson plans for their students. And on Wednesday afternoon, the schedule in Melissa Kaiser Crist’s second grade class called for story time.

But on the other end of the school, staff members at Champlin-Brooklyn Park Academy had something else scheduled.

In honor of Veterans Day, Capt. Brandon Christensen of the Army National Guard wanted to teach the kids the meaning of the holiday.

“One of my big accomplishments over my long span of almost 20 years is, I actually spent some time over in combat with Iraq,” Capt. Christensen said to the class.

Capt. Christensen is the stepfather of Eli, one of the kids sitting in that second grade class.

The captain’s visit came as a surprise, but the real surprise was actually waiting just outside the classroom door. 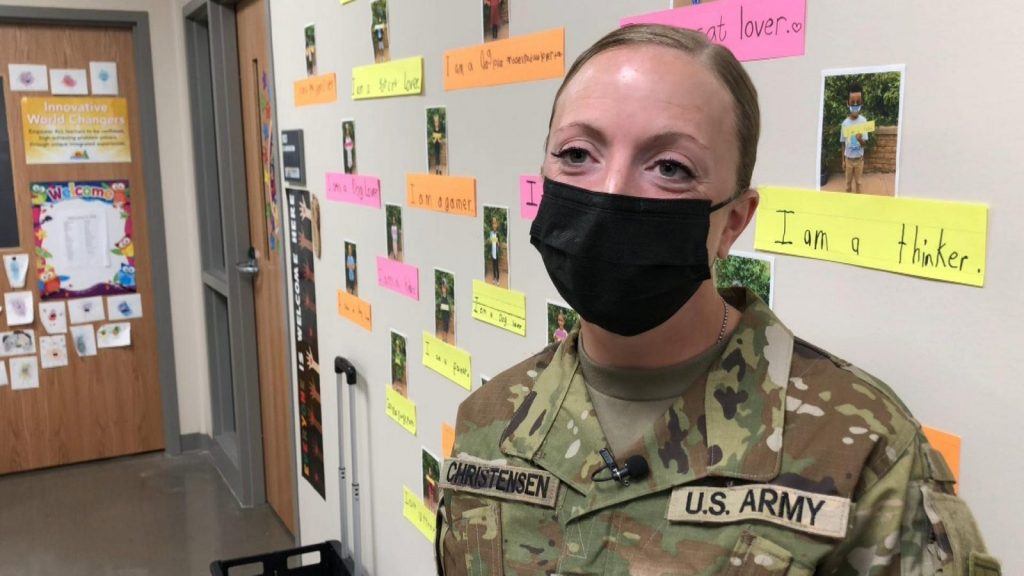 Alisha Christensen stands outside of a classroom door waiting to surprise one of her kids.

For the last six months, Private First Class Alisha Christensen has been in Oklahoma and Texas, training to become a combat medic for the MN Army National Guard. Wednesday afternoon, she returned and wanted to surprise her kids at school in Champlin. Eli’s class was just the first stop.

“Oh it’s so great. Just, my heart overflows,” she said after surprising him. “I’m just so happy to be with my baby. It’s been a long time.”

Next up was a reunion with stepson, Zander and her daughter, Aubrey.

After that, it was on to the adjacent Jackson Middle School to surprise oldest daughter, Addison.

And as can be expected with middle school students, the big reunion had to take place outside of the classroom.

“Why did you go into the classroom? I told you not to do that,” Addison said to her mom.

“It’s okay. I embarrassed her,” Alisha said to a small crowd gathered around her.

A little middle school embarrassment is a small price to pay for a reunion that was six months in the making.

“I think when they’re older they’ll think, ‘mom, that was really cool that you did that,’” Alisha said. “At least that’s the hope.”