Metro Transit continues to make changes so riding the bus is a more positive experience. The program known as Better Bus Stops began in 2014.

In recent years, Metro Transit has put up 12,000 additional signs, built 150 new shelters and replaced outdated bus stops. Some of the shelters now have radiant heat which makes riders happy on a frigid January day. 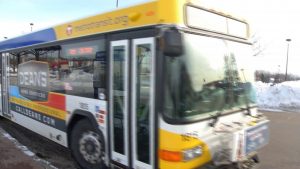 “Especially in weather like this we deserve some type of heat or whatever,” said Constance Thomas of Brooklyn Park. “I think that the updates, like the heating shelters and the on-time call, that’s perfect. They’ve got the signs where you can read ’em. It’s clear as day so you can’t miss it.”

Metro Transit recently acquired 200 privately-owned advertising shelters that were aging and in poor condition. Metro Transit is replacing them with new shelters, or has removed those that did not meet the criteria for replacement.

Other upgrades include concrete pads at the front of the bus stops to make them ADA compliant. This will improve rider and pedestrian accessibility at and around bus stops.

Metro Transit also is putting up new signage with more information at stops. Officials hope it will make routes easier to comprehend. Some riders say it has made the process much better.