Rebekah Coffman is the new Plymouth Historical Society manager. She will be working at the Plymouth History Museum, which used to be the city’s old town hall. Coffman is keeping an eye on the building’s refurbishments and helping develop future exhibits.

“It would have served as the first meeting place for Plymouth,” said Coffman about the old town hall, which was built in 1885. 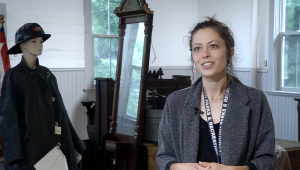 The building was used as the town hall right up to the early 1960s, but it became a storage building after the new city hall was built. By 1975 the building had fallen into disrepair. Fernbrook Lane was slated to be expanded and the old town hall sat right in the way.

“That would have meant either moving or demolishing this building. And so the Historical Society formed as a way to save, essentially, this building, move it back, and then repurpose it as a museum. And so while it’s still owned by the city, it’s been used as a museum since then,” said Coffman.

The Plymouth History Society celebrates its 45th anniversary this October.

Focus on the Future

Today, Coffman is working to restore the physical aspects of the museum. She’s also developing a plan for the future. 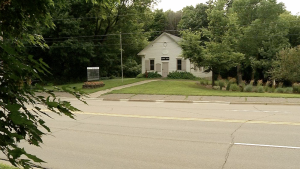 “We’re at a kind of unique point where we’re reimagining what the museum could be,” she said. “Part of that was addressing some deferred maintenance, especially surfaces like floors and walls. But part of that is also kind of an interpretive framework. Thinking through what is this story that we can really tell here.”

Coffman says Plymouth has many stories just waiting to be told. For example, she explains that Plymouth wasn’t always known as “Plymouth.”

“This was historically known as Medicine Lake and nobody knows why it changed to Plymouth. It’s not written down anywhere,” said Coffman.

So when can we come take all of this in? Coffman says the Plymouth History Museum hopes to reopen next year.

“We’ll be closed in part due to COVID, in part, while we kind of rework this. So, yes, we’re going to be doing an opening and then the goal is to have some museum hours after the reopening.”