The Maple Grove City Council approved a new development that would add more than 100 homes to an area that’s still relatively rural. Neighbors have petitioned against the Elm Road project. They sent emails and came to meetings to protest the project. 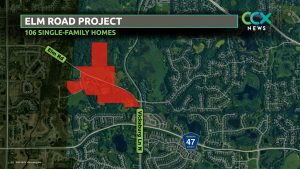 Their concerns are mainly with plans to remove around 50 percent of the trees and the impact the development may have on water quality.

“As neighbors, we want to preserve it,” said Scott Kulberg, who leaves near Elm Road. Kulberg spoke at the city council meeting on March 2. “There’s not only person who has said it’s a bad area. Let’s do something good. Let’s preserve it.”

But the city council felt the developer had done enough to protect the natural elements of the land.

“The proposal made by the developer is more than sufficient,” said Mayor Mark Steffenson. “He’s created a conservation easement area.”

An easement area will further protect a forest preservation area that’s located to the north of the property. The developer also proposed adding buffer zones to adjacent land and at least 300 new trees throughout the property. You can read the full plan here.

“The first time that I never drove down that road, I was stunned. I didn’t know that existed,” said council member Judy Hanson. “It’s so beautiful. I really understand the emotional response from neighbors.”