Maple Grove police and firefighters are being called “heroes” after rescuing a woman in a wheelchair. The woman was stranded on a balcony when a fire broke out at 3 a.m. Sunday at a fourplex in the 9300 block of Juneau Lane North.

The Maple Grove Fire Department first got a call from a woman who said she uses a wheelchair. She said that her garage was on fire and that it was quickly spreading to the rest of the house. Maple Grove police were the first to arrive on the scene. Their quick thinking helped save the woman.

“They show up, confirm that it’s on fire, and see this person on the balcony, so they drove their squad car right up there and used it as a platform to get to her,” said Maple Grove Fire Chief Tim Bush.

Several others made it out of the home before emergency crews arrived on the scene. 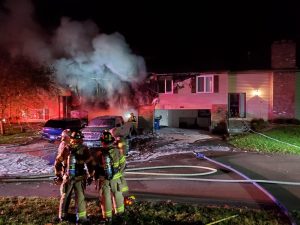 Maple Grove first responders rescue a woman in a wheelchair who was stranded on a balcony during a fire.

Balcony may have saved fire victim

Bush says crews got the woman out of her wheelchair and used a stretcher to hoist the fire victim over the balcony. He says the outcome could have been tragically different if she was on the lower level of the home.

“I cannot guarantee we would have been able to safely get her out if she were on the lower level,” he said.

Firefighters don’t know what caused the two-alarm fire, but believe it started in the garage.

Since there were a lot of items in the garage, fire crews used a special hose that allowed them to spray water in tight spaces. It prevented the fire from causing even more damage to other units.

The unit where the fire started is a total loss. The other units of the fourplex sustained heavy smoke damage.

Three people were taken to the hospital to be evaluated for smoke inhalation. They have since been treated and released.