For a little more than a year, Therese Linscheid has had to work from her Maple Grove home.

“On my phone I have 3,000 emails,” said Linscheid, an employee at Cargill.

Some people find it convenient to work from home, yet it’s not something she particularly enjoys.

“I’m kind of chatty, and I enjoy interacting with people,” Linscheid said. “So it’s been really difficult to be home.”

But early in the pandemic, Linscheid came up with a unique idea.

“We all wear a lot of hats in our role as an admin, so I took selfies with different hats on and sent them to the group,” she said.

You see, Linscheid owns a lot of hats, and her walk-in closet is basically a treasure trove of outfits. So she decided to put those hats and outfits to good use as a way to entertain and inspire her Cargill coworkers.

“Now that we’re at home, I’m dressing for my day, this is my work day, so I’m just gonna have fun with my ‘work wardrobe,’” Linscheid said.

‘Dress for your day’

Nearly every day, she’d dress up as historical figures like Albert Einstein, characters from well-known movies like Shrek, or other famous people from the world of pop culture. 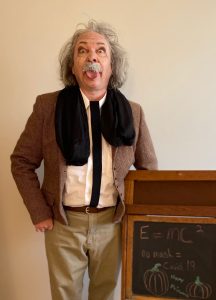 “Nobody told me I couldn’t do it, so I just gave it a shot,” Linscheid said.

And every morning, except for holidays and weekends, photos of her all dressed up would go into people’s inboxes or social media feeds.

“I’m up to 161 Instagram followers, so I’m quite the influencer,” she said.

Week after week, she came up with new ideas.

While she may not be a hoarder, let’s just say that she’s held onto a few things over the years.

“I’m sure that everyone has a prosthetic nose or two at their house,” she joked.

Props from old Halloween costumes, combined with other random things around the house, found new life during the pandemic.

Yet all good things must come to an end. On March 18, Linscheid sent out her final post, exactly one year after she started this project.

And in her final post, she showcased her artistic talent and essentially became one with a painting. 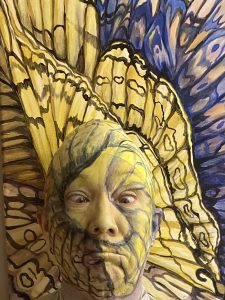 Therese Linscheid blending in with a painting.

“I thought, well, how would I end? So I decided to end somewhat like I began, with kind of just blending in and fading in,” she said.

Blending in, just like any other office employee doing their daily tasks. But for 232 days, Linscheid stood out above the rest.

Meanwhile, Linscheid says her posts are actually more popular now that she’s stopped doing them than when she was dressing up on a daily basis. She hasn’t ruled out resuming the activity, but she says round two wouldn’t be an everyday thing.