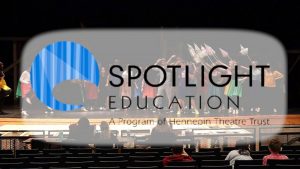 “It’s working on sound, lighting, projection, all elements that make up a show,” explained Novak. “Technical theater is the magic that holds the show together. It creates the impossible and makes anything possible. There’s a lot of imagination and a lot of creativity.

Novak graduated in the spring and will attend DePaul University in Chicago to study film and television production.

Chris Owusu won his Triple Threat award as a junior. He was one of only six students to win the award.

“I was shocked,” said Owusu. “But I was very grateful and very happy.”

Owusu says he worked hard because he loves theater.

“I put everything into it,” said Owusu.

Owusu hopes that theater opportunities open back up soon at Maple Grove Senior High and in the surrounding community.