It doesn’t take much to be kind to other people. In a Maple Grove neighborhood along Red Fox Drive, Molly Bukoskey wanted to create an easy way for everyone in this community to help one another.

The solution was to build a little free library and food pantry.

“During the pandemic, one in four don’t know where their [next] meal is coming from, and so it was important to me to provide for my neighbors because sometimes people just don’t look like they’re struggling but they actually are,” Bukoskey said. 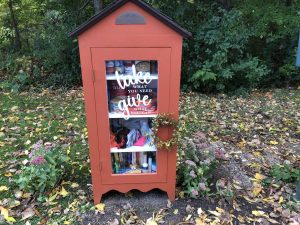 This little free library and food pantry was built in honor of Maria Fury. It’s located at 11801 Red Fox Drive in Maple Grove.

This roadside structure has everything from food, to personal care items, to things that entertain children.

But if you look closely, you’ll see an engraving with the name Maria Pew. She’s the woman who inspired this neighborhood resource.

“I wanted to dedicate it to Maria Pew in her memory, just as something positive in the community instead of something negative,” Bukoskey said.

Maria had only lived in the neighborhood for less than a year.

“She loved the neighborhood, she loved their house. We helped them do a lot of remodeling,” said Bill Pew, Maria’s dad. “So they were kind of settled into it. Or so we thought.”

A victim of domestic violence

This past April, at the age of 28, Maria died at the hands of her husband. Investigators believed the couple was having marital problems. 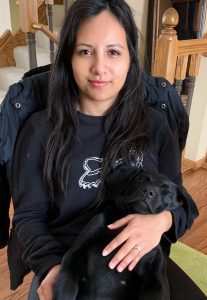 Maria Pew was 28-years-old when she was killed by her husband.

“Probably the worst nightmare you can imagine,” Pew said.

Maria’s parents came out to the official dedication of the library and food pantry on Monday. They say that since their daughter’s murder, they’ve been able to heal their own hearts by helping others.

This library and food pantry is just one such example.

Maria’s death will loom over the neighborhood for some time, but this community wanted to honor her life and her loving spirit, rather than letting the tragedy define them.