The Maple Grove Police Department announced the retirement of two of its highest ranking staff members. Sgt. Trent MacDonald and Capt. Keith Terlinden have a combined law enforcement experience of nearly 60 years, serving most of that with the city of Maple Grove.

Sgt. Trent MacDonald served more than 24 years with the city of Maple Grove. He came to the city after serving six years with the police department in Eau Claire, Wis. During his time with Maple Grove, he served numerous roles including two terms as sergeant of the Investigations Unit.

“Trent demonstrated his passion for the investigations function of our agency and was involved in or led many high profile cases,” said Maple Grove Police Chief Eric Werner.

Werner added that MacDonald is the second member of his family to serve a long career in municipal policing. MacDonald’s last day is Sept. 11. 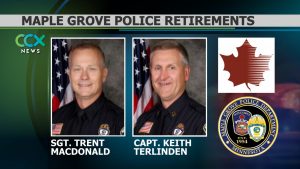 “I just want to thank him and thank his family for allowing him to be such great service to our community and our city,” said Maple Grove Mayor Mark Steffenson.

Council Member Kristy Barnett said she had the opportunity to do a ride-a-long last year at the city’s National Night Out event.

“We had a very good time together with the residents. He was a big hit. He’s a fun guy, who did his job well, and was really well-liked,” said Barnett.

Capt. Keith Terlinden spent 27 of his 29 years in law enforcement working for the city of Maple Grove. Chief Werner said Terlinden was involved in a number of significant projects that included updating the department’s records management system and coordinating the city’s drug take-back program.

Maple Grove City Council member Karen Jaeger got to know Terlinden during her time on the council and rode along along with him during National Night Out events.

“He’s truly an officer and a gentleman, I think of him very highly,” Jaeger said.

“He was my driver one year, and it was the only year in my 13 years we’ve ever pulled over somebody while we were on our way to a party,” recalled Leith.

Leith said the vehicle pulled over had four teenagers in it, all of them wearing masks, years before COVID.

“They were just trying to pull some pranks,” he laughed.

Mayor Steffenson added about Terlinden, “He’s certainly, like Sgt. MacDonald, served in a series of roles in our community. He’s done an excellent job for us.”