Jennifer Grimm had big plans for the spring of 2020. The musician from Hugo had weekly gigs scheduled at a café in White Bear Lake. On June 1, she was planning for a big album release concert at the Pantages Theatre in Minneapolis.

“January, February, March, all the way up to June was going to be my big ramp-up to that concert,” said Grimm, an alumnus of Perpich Arts High School in Golden Valley. “But now of course, it’s being pushed-off.”

Grimm had to move that concert to November due to the novel coronavirus outbreak. When Minnesota Governor Tim Walz issued an executive order on March 16 to temporarily close bars, restaurants and entertainment venues to help limit the spread of COVID-19, musicians such as Grimm and her husband, Joe Cruz, lost one of their primary sources of income.

“I don’t know how many gigs we’ve lost so far,” Grimm said. “We’ve either cancelled or postponed, probably 40, 25, 50 somewhere in there. Just a bunch of shows that are just stopped.”

Grimm and Cruz are fortunate in the sense that they have other ways to earn money, but there’s nothing that can fill the void of performing music for an audience.

“Playing music, to somebody who does it for a living, is kind of like oxygen,” Grimm said. “You need to play, otherwise you sort of wither on the vine.”

Yet in the world of entertainment, the show must go on. And thanks to Maple Grove entertainer Mick Sterling, musicians such as Grimm are getting the opportunity to not only perform, but earn a little money in the process.

The 30-Days Foundation and ‘The Relief Sessions’

“We needed to find a creative way to try to help some musicians that needed some help, cause there’s no income coming in,” said Sterling, whose career as a singer in the Twin Cities dates back nearly 40 years. 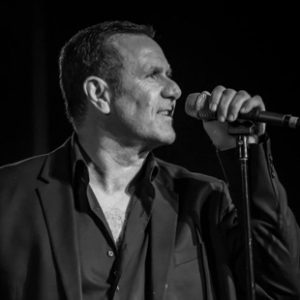 Mick Sterling is a Maple Grove singer and founder of The 30-Days Foundation.

In addition to being a singer, Sterling is also the founder of The 30-Days Foundation, a charity he started in 2011 that helps Minnesota families facing a financial crisis with one-time grants that are made payable directly to the service provider.

But for the musicians and stagehands who’ve been out of work since the start of the COVID-19 outbreak, it would take more than a one-time grant to help them weather the storm.

“When you, as a musician, are looking at your calendar and you know you’re not going to be working in June or July because of decisions that are happening right now, that’s difficult,” Sterling said.

As a way to help his industry colleagues, Sterling teamed up with the north metro cable station, QCTV, to begin a series of live concerts called “The Relief Sessions” to benefit local musicians.

The Relief Sessions stream live on QCTV’s website. Musicians perform for 20 minutes, and anyone watching at home can donate directly to the artist by going to www.the30-daysfoundation.org.

“Something like ‘The Relief Sessions’ is certainly not going to take care of everything,” Sterling said. “But it’s at least an attempt to generate some revenue in these parameters that we’re in right now.” 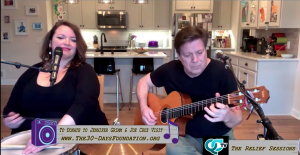 Jennifer Grimm and Joe Cruz perform during the April 15 edition of ‘The Relief Sessions.’

“In this outbreak, it’s great because people need help,” Grimm said of ‘The Relief Sessions.’ “And so it’s a great combination of giving [Sterling’s] musician friends a little ‘oxygen’ and also continuing to help with his foundation.”

Other Ways to Help Musicians

Meanwhile, Grimm says there are other ways people can help the artists during this outbreak. Aside from donating to the 30-Days Foundation, people can support by purchasing their albums or streaming their songs on services such as Spotify.

“Every time you stream, those people’s phones, it throws them a little bit of money,” Grimm said. “So that’s a free way to support musicians.”

Of course, the hope is that people will be able to support the artists in a more traditional way — by seeing them perform live. Sterling would like to see music venues and restaurants begin reopening around the time the governor’s stay at home order ends on May 4.

For now, “The Relief Sessions” will have to suffice.

The next episode will air April 22. You can watch that edition, along with past episodes, at qctv.org/reliefsessions.