According to the Minnesota Department of Natural Resources, more than half the state is under severe or extreme drought conditions. Cities in the northwest suburbs are also raising concerns about their water supply.

“Brooklyn Park and every city in Minnesota is concerned about the severe drought that we’re in,” said Dan Ruiz, director of operations and maintenance for Brooklyn Park.

Brooklyn Park has three water towers and two ground reservoirs. On a typical day, water use is about 6.5 million gallons. However, water use can exceed 21 million gallons of water per day during the hot summer months.

“If you do the numbers, that means about 70 percent of the water that we’re pulling out of the ground is going for sprinkling and irrigation. That’s an exceptional about of water, especially during a drought,” said Ruiz.

Brooklyn Park issued water restrictions last month. Residents must follow an odd-even watering schedule. Homes and businesses with addresses ending with an even number may water their lawns on even-numbered calendar days; addresses ending in an odd number may sprinkle on odd-numbered days. But city officials ask people to hold off on irrigating their lawns during this dry spell.

“The best thing we can do is hope for some rain and use less water when we can,” said Ruiz. 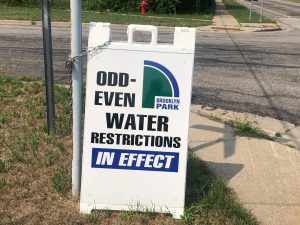 Brooklyn Park and other cities issue water restrictions due to drought conditions.

On Tuesday, Maple Grove announced new watering restrictions. The city now prohibits watering from 10 a.m. to 6 p.m. However, residents can irrigate outside of those times on odd or even days. Maple Grove also supplies water to Osseo, Dayton, and Corcoran, and those cities are expected to ask residents to limit water usage, as well.

“Typically, we don’t see the amount of water we’re pushing through the plant,” said Jay Murzyn, Maple Grove utilities engineer. “Under drought conditions, people are really trying to keep their lawns going, and they’re using a lot more water because there’s no rain.”