The city of Maple Grove approved a new housing development, but by a narrow margin. The vote was 3-to-2.

The development called Rush Hollow would build a wide range of homes in an area north of County Road 81 and west of Fernbrook Lane and the Elm Creek Park Reserve. It includes single-family homes on bigger lots to homes on lots as small as 50 feet wide.

The 50-foot-wide lots are what raised the most concerns. PulteGroup is proposing 60 “villa-style” or one-level homes on the smaller lots in an area along Territorial Road and Maple Grove Parkway. They would be marketed to buyers ages 55-plus.

PulteGroup is also planning 90 single-family homes on 65-foot lots and 80 homes on either 75 or 80-foot lots. The PulteGroup made concessions by decreasing the number of homes on the 50-foot lots after the city council tabled the project at a prior meeting.

“They are bringing that density down significantly,” said Maple Grove Planning Manager Peter Vickerman, referring to homes with 50-foot lots along Territorial Road.

“I am still not happy about the fact we have 60 50-foot lots when we’ve made other developers go up to 65 feet,” said Maple Grove City Council member Kristy Barnett, who voted no. “I feel like we’ve had a standard and we’re not holding this developer to that.”

Council member Karen Jaeger was the other no vote.

Pulte also was behind the Mirabel development in Maple Grove, which built villa-style homes at the northwest corner of Weaver Lake Road and Norwood Lane.

Another part of the project by developer Lifestyle Communities includes six twinhomes and a 74-unit senior housing cooperative that is restricted to ages 62 and up. The Artessa cooperative senior housing, described as a “secluded resort-like retreat,” would feature a variety of amenities including a wellness studio, walking trails and pickleball courts. 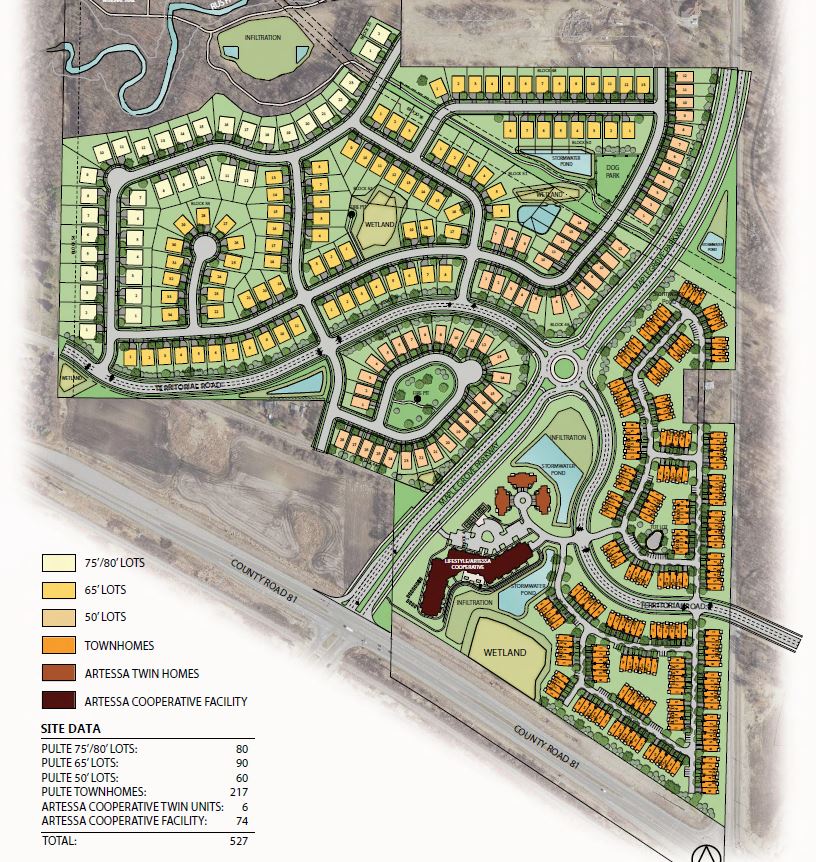 Map showing most of the development area