The city of Maple Grove is taking action to curb what officials describe as “an exponential increase” in the number of rental properties.

The Maple Grove City Council approved on Monday a one-year moratorium that prevents single-family homes and townhomes from being turned into rentals. It takes effect July 1.

The moratorium does not impact apartment complexes and other shared-entry buildings, such as condos.

City officials say they have seen a 30 percent increase in rental licenses in just the past two years. They also stated concern about staffing to keep up with those requests.

“Our staffing model really has been struggling to keep up with the rapid rise in the number of rental properties in Maple Grove,” said Joe Hogeboom, director of community and economic development.

Hogeboom said the the city has one rental inspector who is responsible for inspecting all the rental units on a two-to-three year basis.

“We’re having some backlog issues right now,” he said. 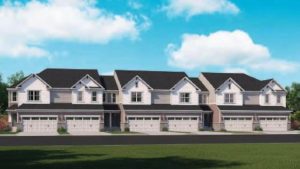 Rendering of townhomes proposed to be rentals the Maple Grove Planning Commission reviewed in March.

Another concern the city has is the current limits on home ownership opportunities. Hogeboom said Maple Grove did not see a home sale last year under $300,000. Besides limited supply, Hogeboom said large corporations often outbid families looking to own a home.

Elected leaders agreed Monday that it would be a good time to revisit the city’s housing practices.

The moratorium would last until July 1, 2023. The city will use the time to analyze staffing models as well as licensing procedures and rental fees. It will also explore ways to increase home ownership.

“We have given it a lot of thought and we do need to make some changes and this will give staff the time they need to make those changes,” said Maple Grove City Council member Kristy Barnett.

Renewals of existing licenses would not be impacted by the moratorium. Rental conversions that were approved in the last few months would also not be impacted.