If breakfast is considered the most important meal of the day, Lynde’s Restaurant in Osseo has, for the last 40 years, been a go-to spot for people who want to get their morning started off right.

“Oh good food. I love it,” said Blanche Stenson of Osseo. “We have never had a poor meal here yet.”

Thanks to generous portions of food, such as “the biggest pancake this side of the Mississippi,” and a machine that makes freshly squeezed orange juice (a.k.a. “liquid gold”), it’s no surprise that Lynde’s Restaurant continues to thrive after all these years.

“What we do here at Lynde’s is, we give them good quality food,” said Mark Lynde, the owner/operator. “Fast and efficient service with a smile, and then fair pricing. Those three concepts have got us to where we are today.”

Mark Lynde owns this Osseo institution, which is the true definition of a family restaurant. 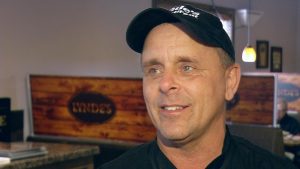 Mark Lynde runs the restaurant with his wife, Cathy, and daughters Lexi, Josie and Kalista.

Mark’s parents started the business, and now, his wife and three daughters help him run things.

“I started at age 9 working here,” said Lexi Lynde, Mark’s 18-year-old daughter who now holds the title of general manager. “Yeah, dish washing in the back. I do all the positions here, but I love it here.”

Even before Lexi was on the payroll, she and her sisters did commercials back in 2009 to help promote the restaurant. 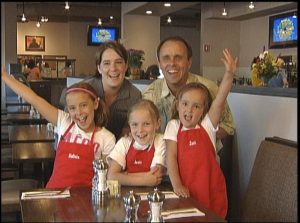 The Lynde family in a 2009 commercial.

Yet while advertising always helps, it’s the food and the atmosphere that keep people coming back.

“It’s great to always have a familiarity and when they walk in and we already know their order and stuff,” Lexi said.

It’s the kind of service that you can only find at a small-town family restaurant.

“The family restaurant is where it’s at,” Mark said. “We’re here every day, we’re making stuff from scratch. We don’t open a box. If you make good food, people come back for it.”