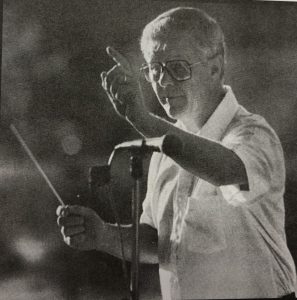 “Mr. T. was loved by so many people,” said Serber, who has been directing the band since Thompson retired in 1991. “He was like a father to me.”

Roger Thompson directed the Robbinsdale City Band from 1969-1991 and also was a band director at Robbinsdale High School and then Cooper High School.

According to the book “The Robbinsdale City Band Our Whiz Bang Century,” Thompson took over as a director with the caveat that he could start an adult concert band to have a little variety in his workday.

Thompson wrote that the only requirement for membership to the concert band was you had to play an instrument and the only audition was the ability to climb stairs to the third floor of the house. Only five people showed up at the first meeting of the adult concert band, so the group had to recruit high school musicians to fill the gaps.

Thompson took the Robbinsdale City Band on tours all over the country. They marched in parades at Disneyland, El Paso, Philadelphia, Baltimore, and Washington, D.C. On one of those trips, he even arranged for the band to march in his hometown of Towson, Md.

“That day there was a drenching rain that lasted until we finished the parade,” wrote Thompson. “That trip ended my career of taking tours with the Robbinsdale City Band.”

However, Thompson’s favorite places to play were the Lake Harriet Bandshell Park and the end of the year holiday concert at St. Therese.

“He had very high standards for everybody,” said Serber, who also traveled with Thompson when he took the Robbinsdale High School band on a tour in Europe. “He could appear to others as being yelling or gruff. But I always laughed at it because it was his way of getting his points across. He kept us all on our toes and pushed us really hard that way and expected a lot out of us.”

Thompson retired to the Carolinas in 1991 and handed off the baton to one of his former students, Michael Serber. Serber became the longest band director in the 114-year history of the Robbinsdale City Band and announced his retirement plans this past March.

Thompson is survived by his wife, Lynn and a son, Tim. His daughter, Wendy, passed away last year.

Serber urges former band members to share condolences and memories in cards that will be mailed to Thompson’s family. You can email Michael Serber for more information. 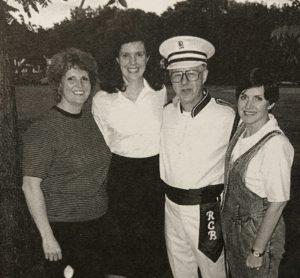 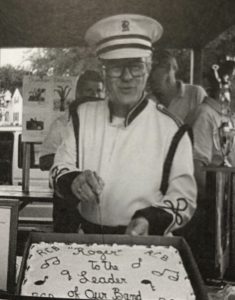