The Animal Humane Society in Golden Valley typically showcases small domesticated pets, but on Friday, the group had surprise visitors.

Llamas and more llamas strutted their stuff through the parking lot. Rick Carlson from Carlson’s Llovable Llamas stopped by to teach summer campers about llama biology, and care. 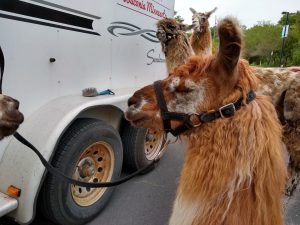 “Our oldest llama is 18-years-old,” he told the captive audience.

He says llamas are the South American relative of the camel. The animals also have three eyelids to keep sand out and will never deliver their babies during lousy weather. Carlson also says llamas are kid-friendly. 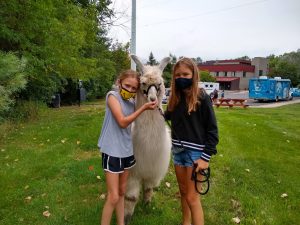 Young campers at the Animal Humane Society visited with Llamas.

The Animal Humane Society summer camps are focused on teaching compassion and empathy for pets. The goal is to also introduce young people to animals they might not be familiar with.

Pointing to the llamas, Holly Watson-Wetzel, the Animal Humane Society’s educator supervisor, said, “It’s an animal that not a lot of kids in the urban area know about, and they have kind of some ideas about them, that they spit and they might do funny things.”

“I thought we’d only be seeing cats and dogs and rabbits,” said 13-year-old Sean Dolder. He’s never been up close and personal with a llama before.

“They’re pretty calm and tame,” Dolder said as he brushed the coat of his new best friend. “She’s kind of social, and she walks towards everyone else, she’s pretty friendly towards everyone. “