A concept plan for an international food village aims to make Brooklyn Center a destination for global food. The ambitious new project is led by James Sanigular, owner of International Food Corporation, which supplies global foods to retailers like Cub and Hy-Vee.

The main portion of the project would convert the former Brooklyn Center Target store into a 110,000-square-foot ethnic food market and grocery store.

“We kind of describe it as Midtown Global Market meets Costco, where it would provide opportunities for food from all over the world, but also really a destination in that it would provide a bulk opportunity as well,” explained Meg McMahan, Brooklyn Center’s community development director.

According to city officials, Sanigular is also interested in purchasing a neighboring strip mall that could be turned into housing, a health clinic and an African brewery.

“They’re testing out a lot of different things to see what’s going to work on the site,” said McMahan. “What it might look like six months from now may not exactly be the mix of uses that we’re looking at today.”

The Brooklyn Center City Council recently approved a preliminary development agreement with Sanigular’s company. The agreement would give the company exclusive negotiating rights for one year to work out financing to purchase the Target site, which the city owns. The city does not own the neighboring strip mall. The developer would have to work out a separate agreement in order to purchase that site.

The project, as proposed, would be substantially bigger than the Midtown Global Market in Minneapolis, a 58,000-square-foot marketplace. McMahan says the Brooklyn Center concept could be between 100,000 to 140,000 square feet.

If the plan goes through, the project would be a central focus of the city’s so-called “Opportunity Site” master plan.

To the south of the Target site, the city previously received plans from a separate developer to construct about 750 housing units at the corner of Shingle Creek Parkway and Bass Lake Road. An environmental review for that project is almost wrapped up. The city council could give land-use approvals for that project this summer. 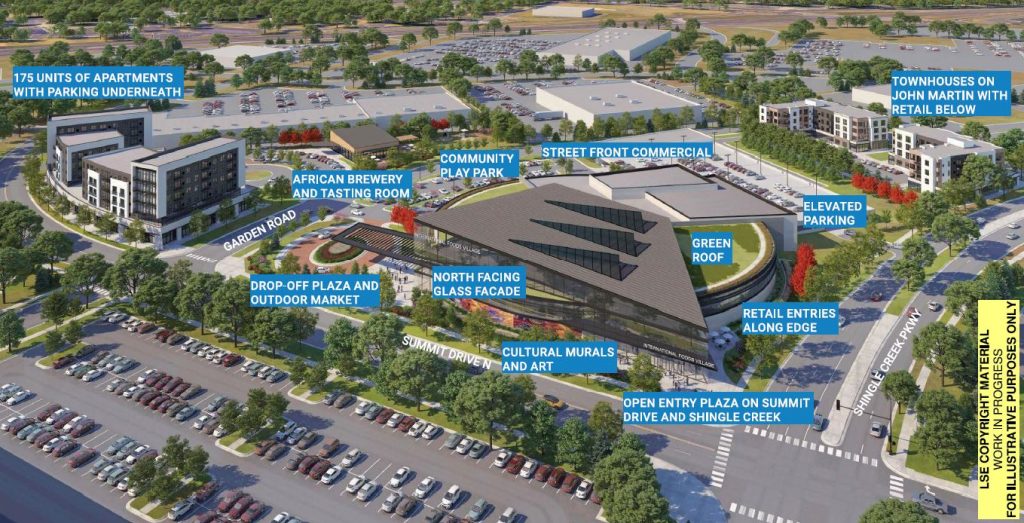