A major road construction project in the northwest corner of Brooklyn Park that’s been six years in the making is nearly complete.

Officials from MnDOT say they hope to have the new interchange at Highway 169 and 101st Avenue finished just after Thanksgiving.

“We talked about it for years and now it’s done,” said Kent Barnard, a MnDOT communications specialist. “And it’s almost like a sense of relief that we’ve gotten another project out of the way, and especially in the case of this project, this is gonna be such a boon for the businesses and the commercial area up here and for traffic up here in this area.”

Work on the new interchange at Highway 169 and 101st Avenue began this spring.

The goal of the $30 million project is to stimulate more economic growth in this area and handle the transportation needs that come with new businesses moving in.

Construction is slightly ahead of schedule, due in part to favorable weather this past summer, along with reduced traffic flow brought about by the pandemic. 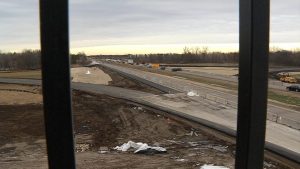 Once the work is complete, MnDOT officials say drivers will see some noticeable changes.

“Well, the biggest change you’re going to notice is instead of having an at-grade intersection as we had in the past, we now have a full system interchange with loops and ramps in there, which obviously is a huge traffic change for people,” Barnard said. “It’s gonna be able to handle a lot more traffic. There won’t be a signal system there anymore, which will make things much easier for traffic on Highway 169.”

MnDOT officials say the interchange is on track to be finished on Monday, Nov. 30.

The city of Brooklyn Park hopes to hold an in-person, grand opening celebration sometime next spring or summer.