A man remains hospitalized after he was struck by a bullet Wednesday afternoon at a Brooklyn Park strip mall near 63rd and Zane Avenue.

Investigators say a man was sitting in his car while his son was getting a haircut at Boss Kuts barber shop. Then around 4:15 p.m., someone started shooting from a moving vehicle and hit the man in the chest.

However, police say the man wasn’t the intended target, but rather a group of juveniles who had gathered in the parking lot. 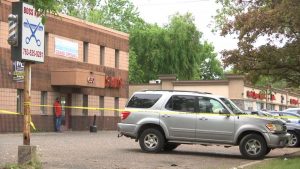 The drive-by shooting occurred in this parking lot near 63rd and Zane in Brooklyn Park.

“Right to the side of the barber shop they were shooting dice and they were obviously the intended target,” said Brooklyn Park Deputy Police Chief Mark Bruley. “It’s a group of people that have been causing problems over the last few weeks, and so there’s some sort of feud going on between them.”

Evidence of that feud was on full display for anyone who passed by the intersection on Wednesday, as investigators looked at shell casings on the ground just feet away from bullet-riddled vehicles.

The conflict, according to Bruley, revolves around a turf war over who gets to sell marijuana in the area.

“We’re seeing a lot of violence and shootings at that intersection, at those businesses, over the marijuana,” Bruley said.

Investigators say the feud was also at the heart of a shooting on Monday when a man was shot in the leg outside the Fast N Fresh Foods convenience store.

“And [the victim] refuses to cooperate,” Bruley said. “Refuses to provide information about who did it. He knows who did it. Refuses to release any of his medical records to us and just simply won’t talk to us about the incident.” 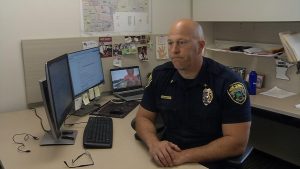 They’ve tried youth outreach efforts and neighborhood clean-ups near 63rd and Zane, but so far, their strategies haven’t worked.

“We started off with robberies, and now we’re just seeing open shootings,” Bruley said. “So the answer isn’t easy, we know that. But we’re working with all our partners to try to get everybody focused in one direction.”

Meanwhile, the Hennepin County Attorney’s Office provided this statement Thursday afternoon in response to Bruley’s comments about a lack of accountability:

While we share Deputy Chief Bruley’s frustration with the increased gun violence throughout Hennepin County, we take issue with some of his statements. Whether it is juveniles or adults with guns, the Hennepin County Attorney’s Office prosecutes those cases fully and the vast majority of the time, we are successful. In 2020, we received 20 juvenile felony referrals from Brooklyn Park on cases involving guns and we charged 19 of them.

It is true that we have raised the amount of marijuana a person must possess or sell before we will file a felony charge. With our limited resources we wanted to concentrate on more serious crimes. However, that policy makes an exception for someone who sells or holds a small amount of marijuana but is also carrying a gun. In those cases, which we will charge them with felonies.

Meanwhile, the Hennepin County Department of Community Corrections and Rehabilitation provided this statement regarding juvenile detention:

The county’s juvenile justice partners work closely with area law enforcement to find solutions that prioritize community safety while also focusing on the unique needs of youth. For this reason, there are many non-violent offences that do not result in a youth being held at the Juvenile Detention Center, such as marijuana possession. With that said, the facility has always held youth for violent felony offences. Additionally, the facility may hold a youth for a non-violent offence, depending on factors related to community safety. Since October 18, 2020, 27 youth have been booked into the Juvenile Detention Center by law enforcement for weapons related offences.

The criteria that determines when a youth is held at the facility is an example of the juvenile justice system working with law enforcement and other community stakeholders. The current criteria were developed more than 10 years ago in partnership between our department, law enforcement, the County Attorney’s Office, the Public Defender’s Office, juvenile courts, and area schools. No matter the offence, the entire juvenile justice system works diligently to hold youth accountable for their actions, while also providing them with tailored services to address underlying needs related to their offence.