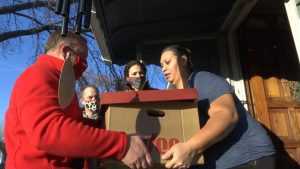 The meal kit contained a turkey, pie, and several sides.

“It’ll be nice for her to finally have some special attention paid to her for all of the things that she does for other people and her family,” said Angela Lindblom, marketing director from Chick-fil-A.

“It’s just a good thing to do. It’s definitely what our company does,” said Phil Hammermeister, store director of the Brooklyn Park Hy-Vee. “We’re involved in our community. We try to take care of the people that take care of us. And so to be able to get out in the community and do some good for somebody, it’s a great thing.”

Sanchez is one of 11 people who received the Thanksgiving meal kits out of more than 300 who were nominated.

“I’m grateful, thank you so much,” Sanchez said. “I was not expecting that, so I’m thankful.”