Local DFL leaders expected quick work Wednesday during a special session. Legislators convened for a special session as required by state statute because Minnesota Governor Tim Walz extended the peacetime state of emergency. It’s the third special session ordered by the governor this summer due to the COVID-19 pandemic.

House Speaker Melissa Hortman, DFL-Brooklyn Park, says she hopes to make progress on a bonding bill for construction projects. Though she says the legislature won’t be able to act on it until September at the earliest. That’s because the state must observe a so-called “quiet period” with its finances after selling bonds Tuesday to fund previously approved construction projects.

Hortman says the House does expect to pass a bill to spend some of the federal CARES Act money. It would fund day services for people with disabilities. The Republican-controlled Minnesota Senate previously passed the measure. 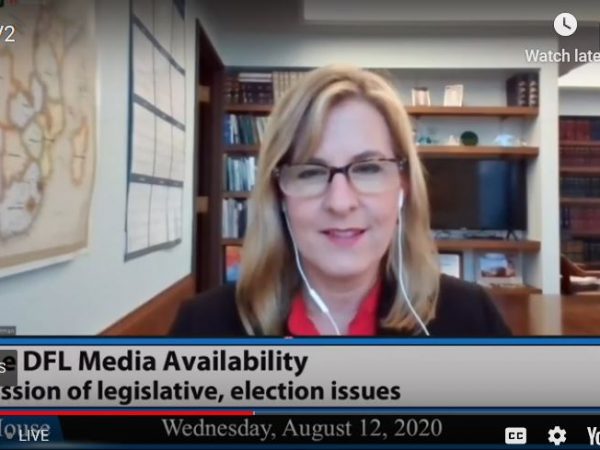 During a video press conference Wednesday with the media, Hortman and House Majority Leader Ryan Winkler, DFL-Golden Valley, said they’re hopeful they can overcome differences with House Republicans that can lead to a jobs bill, which includes projects impacting the northwest suburbs. Hortman says House Minority Leader Kurt Daudt has two concerns that she says are “sincere and heartfelt.” Those concerns are about the state’s deficit, currently at $4.7 billion, and the governor’s continued use of emergency power.

“My hope is that between now and when we come back in September is that we can get the minority leader to untie those issues,” said Hortman. “These are very needed local projects and jobs in the bonding bill.”

The GOP-led Minnesota Senate plans to vote Wednesday to rescind Governor Walz’s emergency declaration. However, the DFL-controlled House has no plans to lift the emergency. Hortman says 49 of 50 governors have emergency powers right now and noted President Donald Trump has declared a national state of emergency with no indication of ending it anytime soon.

‘Not Too Late’ to Get Things Done

“A lot of these are about local projects and communities where people may start to pay more attention,” Winkler said.