Grocery stores in the area are rapidly adopting new procedures to try and keep customers safe from the COVID-19 outbreak. 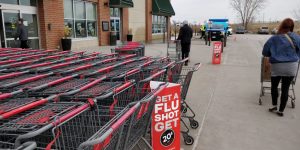 HyVee, Lunds & Byerlys, and Cub Foods have reduced their hours. HyVee stores are open to the general public from 8 a.m. to 8 p.m., with special high-risk customer hours between 7 a.m. and 8 a.m. High-risk customers are those 60 and older, expectant mothers, or people with other health conditions that makes them vulnerable to a more serious coronavirus infection. 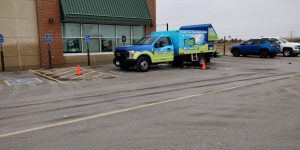 The shortened grocery hours allows staff time at night to thoroughly sanitize the stores and restock high-demand items. The Iowa-based chain is also installing plastic barriers between customers and cashiers at all locations.

Shoppers at HyVee stores will find sanitary wipes at the entrance for hands and carts. Stores are dedicating a staffer to be at the entrance cleaning shopping cart handles before customers take them. Some customers at the Brooklyn Park store on Sunday might have noticed a dumpster cleaning service out front, cleaning not dumpsters, but carts. HyVee spokesperson Christina Gayman tells us stores are hiring outside vendors to provide additional sanitizing of carts. 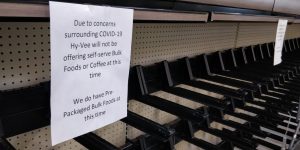 HyVee stopped allowing customers to get their own self-serve bulk items like candy or granola.

In addition to closing down self-serve to-go food options, HyVee self-serve bulk foods have been removed from the grocery’s aisles for the time being. Instead, store staff is pre-packaging bulk and other items such as doughnuts that would normally be self-serve. Lunds & Byerlys is also removing access to self-serve foods, and is restricting purchases of hand sanitizer, disinfectants, bottled water, gloves, facial tissue, and toilet paper to two per customer.

Smaller stores are also working to protect their customers. Brad Hansen, owner of Dean’s Supermarket in Osseo, says his workers are wiping down anything customers touch every 30 minutes. Staff members sanitize shopping carts and baskets immediately after they are used. It’s an additional workload and can put a strain on workers, but Hansen says “it’s something that’s gotta be done.”

Adding to the workload for all groceries is the continued shortage of some items. Hansen says Dean’s hasn’t had toilet paper for at least a week.

A Need for More Workers

The toilet paper aisles at the Brooklyn Park HyVee are similarly bare. Extra work is needed to restock rapidly-disappearing items as well as cleaning the stores. That led HyVee to outsource some of its Aisles Online home-delivery service to 3rd party companies like DoorDash. The company has also suspended its floral delivery service entirely.

In fact there’s so much extra work that, unlike many companies which are seeing sharp reductions in labor force as demand drops, HyVee is actually hiring temporary part time workers to meet demand. The company points out this hiring spree may be a good opportunity for people laid off due to the pandemic. People interested in temporary grocery work can go here and choose the store they’d like to apply to.