Grocery Stores Try to Stay Ahead of Storm, Holiday Rush

The holiday shopping season isn’t just confined to malls and big box department stores. At Almsted’s Fresh Market in Crystal, it’s a week that’s already one of the busiest of the year.

“I’m up and at ’em this morning, better get in early before the crowd, if there is any,” said Michael Engwall, a customer from Robbinsdale Wednesday morning. “I’ve got lunch meats. Hamburgers. Rice. Some of the essentials for our house.”

Thanks to Mother Nature, Almsted’s was hit with an even bigger rush than they’re used to.

Staff members say business over the last couple of days is roughly 90 percent higher than normal.

“We tend to have a little bit older clientele, and they get concerned about what the weather is going to be like,” said Jim Almsted, the owner. “So things have been, business has been very good.”

But the big question, according to Almsted, is whether the rush will continue, or if the snow storm that was forecast shifted the shopping to earlier in the week.

“I think on the whole, we’re in pretty good shape,” he said.

Yet while they’re here, they grabbed a few holiday treats as well.

Some of the things that are drawing people in are seasonal items like the ever-popular fruitcake, and some lesser-known items that are steeped in tradition.

“This is yulekage,” said Almsted, pointing to circular-shaped loaf of bread covered in frosting. “It’s a Scandinavian bread that if you eat it, it’s supposed to give you good luck during the holidays. Cardamom I think is the major spice in it. But we do very well with it. We sell a lot of yulekage.” 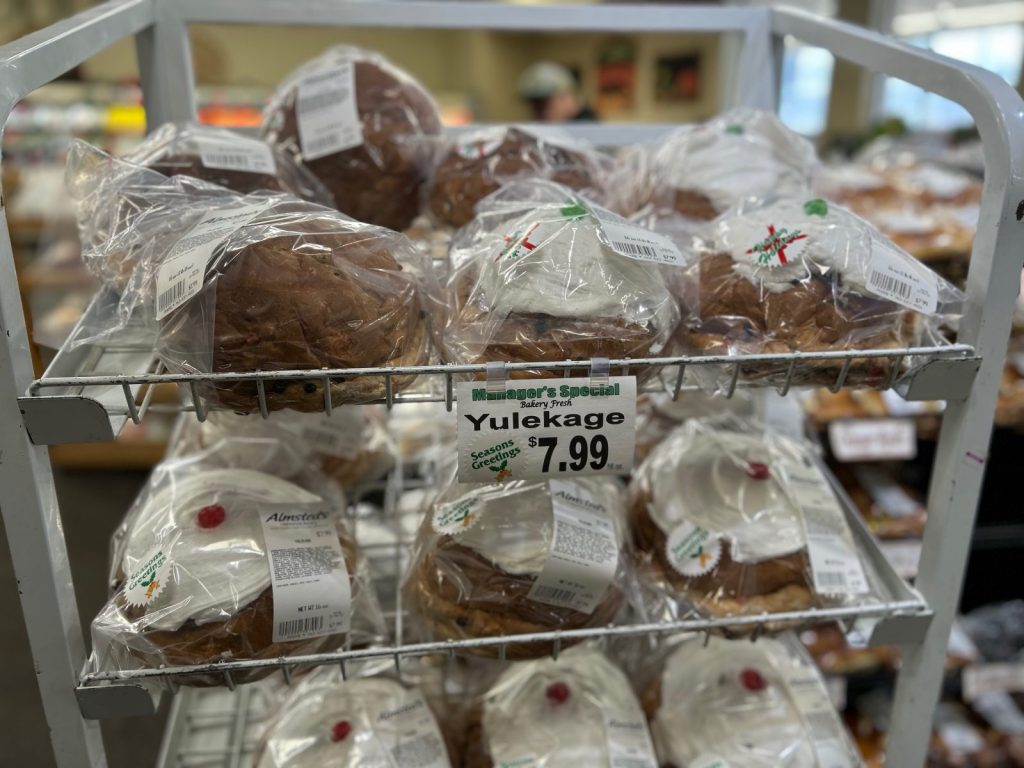 It didn’t take long to find someone who came in to pick up a loaf of the lucky Scandinavian bread.

“I actually don’t like it,” said Janet Midthun of New Hope as she was purchasing the yulekage. “I’m gluten-free. So I buy it for my mother.”

Shopping for others is, after all, what the holiday season is all about. Although with a bakery section like Amsted’s, where nearly everything is made from scratch, the temptation to buy something for yourself is real.

“I think I might just pick up some fruitcake for the weekend,” said Engwall. “That would be fun.”