“It’s time for us to make sure that consumers have the choice, when they pull up to a pump anywhere, they can put in clean-burning, Minnesota-made biofuels,” Governor Walz said at a news conference in New Hope Thursday afternoon.

“We can start thinking about what that looks like into the future as we increase blend limits, because what we know from the research is, these fuels work. They work in our newer vehicles, they work in our older vehicles. We can expand that usage. It just needs to bring it to the consumers so that they can make the choice,” Walz said.

Walz and several state lawmakers were at a Holiday gas station in New Hope, where owner Chris Robbins received a state grant enabling him to upgrade his facility to offer E15, E30 and E85 fuels.

Walz and other legislators wanted to rally support for a Biofuels Infrastructure Grant Program budget proposal. The proposal includes an investment of $2 million per year to increase access to ethanol and biodiesel across the state. These grants would give gas station owners in Minnesota funding to install the equipment needed to ramp up use of higher blends of biofuels, such as E15 (gas that is 15% ethanol), E30 (30% ethanol), and E80 (80% ethanol). 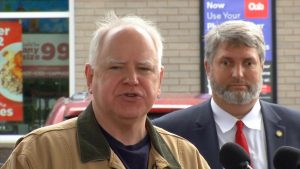 There is a coinciding push by the Biden administration for vehicles to go entirely electric. Walz says fossil fuels will still be needed for decades and biofuels are a sustainable stopgap.

“This is going to take some time,” Walz said. “Electric vehicles make sense. We’re talking about infrastructure for electric vehicles too. But we’re going to continue to need to use fossil fuels into the future. Those electric vehicles do not impact construction equipment, farm equipment, things like that. That’s why the expansion of higher blends of ethanol can even start to replace some of that as we move forward. So we’re talking decades of the need to continue to use these fuels. And it makes sense to me, let’s get them cleaner-burning, home-grown.”

Lawmakers at the news conference said that the proposal does have bipartisan support.

Meanwhile, if you’re wondering whether your vehicle can take the higher ethanol blend, lawmakers at the event said that any vehicle produced after 2001 can take E15. Flex-fuel vehicles can use E30 and E85.