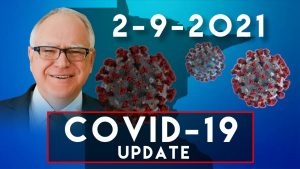 Also see: 2-4 Minnesota COVID-19 Update: ‘This is Probably Not the Year to Have a Super Bowl Party’

Minnesota Governor Tim Walz announced Tuesday during a press conference that the state should be able wrap up vaccinating residents of long-term care settings by the end of this month. The announcement coincides with unneeded doses at long-term care facilities being transferred to pharmacy clinics throughout the state.

“We are giving Minnesotans expanded options for how they can get the vaccine,” said Walz in a statement to CCX News.

Walz is reallocating 8,000 doses this week for Walgreens to vaccinate Minnesotans 65 years of age and older at 40 in-store pharmacies across the state, including locations in Hennepin County. Appointments will be made available later this week. The locations and contact information for scheduling appointments will be acccesible at mn.gov/covid19/vaccine/find-vaccine.

Walmart and Thrifty White will also administer more than 16,000 doses at locations across the state to Minnesota seniors, as part of the first phase of the Federal Retail Pharmacy Program that launches this week.

The state will also be notifying seniors who have signed up for the waitlist, such as those who pre-registered for the recent mass vaccination clinic in Brooklyn Center, if there are other vaccine opportunities in their area.

The Minnesota Department of Health also announced Tuesday that it expects an additional 5% more doses next week. The state had been receiving about 60,000 doses a week from the federal government toward the end of January. That increased to 83,825 first doses of COVID-19 vaccine this week.

“Even at these increments, which we are grateful for, it’s still only another few thousand doses a week,” said Minnesota Department of Health Commissioner Jan Malcolm.

According to the state’s newly expanded vaccine data dashboard, 569,164 people in Minnesota have received at least one dose of vaccine. So far, more than 41 percent of first doses have been administered to people 65 and older. That age group has suffered 89 percent of the covid-19 deaths in the state.

The new dashboard more clearly reflects the number of doses held by each health care provider and for how long, and uses more recent American Community Survey population estimates to track the state’s progress toward vaccinating 80% of the state’s vaccine-eligible residents.

According to the Centers for Disease Control, Minnesota is 14th among states for the number of doses administered per 100,000.

Minnesota’s COVID-19 seven-day case positivity rate fell to 4 percent according to state health data released Tuesday. That’s the lowest that key indicator has been since June. Walz indicated that could open more discussion about increasing in-person classes for middle and high school students.

Still with concern about emerging variants, such as the ones discovered in the United Kingdom and South Africa, vaccination will continue to be a central focus.

“The SARS-coV-2 virus itself is not really a fast mutating virus,” said Malcolm. “The reason we’re seeing all these viruses [variants] is because of the extraordinary amount of cases around the world and in the country.”

Walz did mention the news is encouraging about the one-dose Johnson & Johnson vaccine, but also mentioned another 16 pharmaceutical companies whose vaccines hit a dead end, per conversations with the White House.

“Even as we administer more doses, we risk falling behind if we don’t get the volume of vaccine we require,” said Walz in his statement to CCX News. “We need the federal government to step up distribution so we can crush COVID once and for all.”