Officials at Second Harvest Heartland in Brooklyn Park say they are in the hunger fight of their lives. During the COVID-19 pandemic, one in eight Minnesotans, including one in five Minnesota kids, don’t know where their next meal is coming from.

“Thirteen million Americans, including tens of thousands of Minnesotans, will see their unemployment benefits end in a month,” said Allison O’Toole, CEO of Second Harvest Heartland. “We have endured so much as a community this year, and we’ve also rallied to come together and get through one of the worst surges in hunger to date. But we cannot let up.”

Governor Walz joined O’Toole Wednesday morning to pack emergency food boxes that will be sent off to different food shelves across the state. 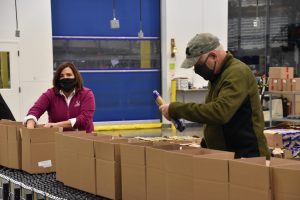 The governor says many of the people experiencing hunger this year have never been in this position. He said it’s likely that they work in industries ordered to close to help stop the spread of the virus.

Walz is hopeful that the legislature can pass a relief package in early December to help those who have been impacted.

“The process is moving. There is every reason to believe that there’s bipartisan momentum to get this done,” said Walz. “We’ll work out the details, and my hope is we can get something next week and that it’s — we’re looking at mechanisms that are almost instantaneous in moving this support to people. Because as Allison would tell you, any family that misses that box, that’s a really tough day or a tough week, and so we can’t have gaps in our safety net.”

In addition to help from the state, the governor and hunger relief leaders urged Congress to pass a COVID stimulus package that includes increased benefits to the Supplemental Nutrition Assistance Program (SNAP).