Marches and protests have only grown in the recent months and weeks. Now police reform takes center stage, with lawmakers and the governor calling for change. 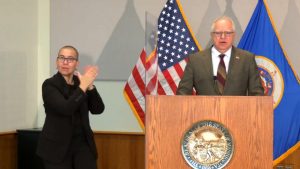 “There’s an intersection of a lot of commonality. The work we have and the potential we have to show the rest of the country where potential change could come, where we could bring folks together, when a young man like Daunte Wright is stopped, that he doesn’t die from that traffic violation,” said Gov. Walz.

Local house lawmakers, like Speaker of the House and Rep. Melissa Hortman (DFL-Brooklyn Park) and Rep. Cedrick Frazier (DFL-New Hope) spoke as well, drawing attention to the bill recently passed by the House.

“Minnesotans are calling for action now. We stand with them. We hear them and we are determined to enact meaningful police reform this year,” said Rep. Hortman.