Goodwill Wants People to Hold Off on Bringing in Donations

Goodwill-Easter Seals Minnesota is encouraging people to hold off on dropping off donations during the governor’s stay-at-home order. Goodwill, like other thrift stores, are closed. Still, that’s that’s not stopping some people from dropping items off. Goodwill officials say it’s “creating a mess.”

“We’re not able to accept donations. There isn’t anyone at the stores. But we are still seeing people leave donations, which we greatly appreciate their generosity,” said Nick Adams, senior director of retail stores with Goodwill.

A few weeks ago, bags were scattered at the Brooklyn Park location parking lot. Adams says people were scavenging through them. 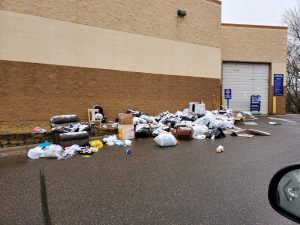 “It puts expense on us because we have to dispatch someone to clean those up. And dumping at a business that’s closed is illegal, and you could get fined,” explained Adams.

“When the time comes when we can reopen, we’ll gladly accept those donations,” said Adams.