On a beautiful day, you just might find as many people hitting up a disc golf course as a regular golf course. The sport is growing in popularity, and you can see proof of that in the Twin Town Throwdown disc golf tournament at Brookview Golden Valley. The tournament featured more than 200 competitors in the third year of the competition held in mid-July. 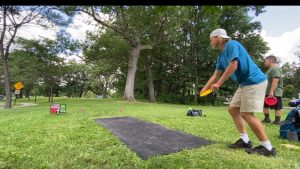 Jason Wilder, the tournament director, says the event has grown in popularity because people are familiar with Brookview Golden Valley’s winter courses.

“People who have played that winter course have always dreamed of being able to play the course in the summer time,” said Wilder. “We’re just really excited about the growth [of disc golf].”

Wilder says the sport has grown steadily over the last 10 years, but this spring it took a big uptick.

“This spring because of COVID, retailers and manufacturers have seen anywhere from a 200-300 percent increase in sales,” said Wilder.

Wilder calls it an onslaught for retailers, who can’t keep merchandise on shelves on top of having a tough time finding staff to work.  There is a disc golf business called Gotta Go, Gotta Throw in Golden Valley.

Players say they’ve seen the increasing popularity reflected in more courses and more players on those courses. What’s the draw?

“It’s a combination of being outside, there’s a lot of cool disc golf courses around, so part of it is nature, but the other part is working and getting better at the sport ,” said Alex Mielke. “It’s quite fulfilling hitting a 30-foot putt or a 50-foot putt or getting a perfect drive.”