In this ever-evolving world, change, in some form or fashion, is inevitable.

“I think there’s a lot of excitement about seeing our downtown become more of a gathering place for people to come, shop, eat,” said Jason Zimmerman, Golden Valley’s planning manager.

Golden Valley’s downtown, which city officials define as the area near Winnetka Avenue and Golden Valley Road, already has plenty of amenities.

“We really love the layout of having restaurants and a hardware shop and some of the other things that are available to us here in the downtown area,” said Davis Johnson, a Golden Valley resident.

“I love the area,” said Beth Cramer of Plymouth. “We live close by and we have no other reason to go elsewhere. So we like it here.”

But as time passes, the hope and expectation of convenience can leave people wanting more.

“I think a grocery store in this specific region would be helpful,” Johnson said.

“There is a Starbucks across the way, but if they could bring a Caribou in here, that would be about perfect for me,” Cramer said.

While city officials aren’t making any promises about a Caribou, they are in the middle of a comprehensive study to transform downtown Golden Valley for the next several decades.

“We’ve already had some developers express interest just knowing what our comprehensive plan says and what the initial conversations around the downtown have been,” Zimmerman said. “We have developers who are waiting to see how that plan plays out.”

Golden Valley recently hired a consultant who’s putting together a document that lays out the city’s vision.

“If in the future a redevelopment project happens, or a developer comes along, we can point back to it and say ‘this is the city’s vision for this particular property or this area of downtown,'” Zimmerman said. “And hopefully we’ll see some of that change happen over the next five years.”

Some areas of opportunity include redeveloping the site of a vacant Park Nicollet Clinic and a nearby Wells Fargo bank branch that has more parking space than it needs.

“It’s a large facility,” Zimmerman said. “People don’t use banks as they used to, so maybe they could condense.” 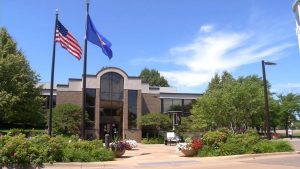 Golden Valley’s City Hall campus could potentially be relocated and combined with the nearby public library.

Then there’s Golden Valley’s City Hall campus. Not only are the buildings aging, they’re also spread out.

“We could consolidate,” Zimmerman said. “Maybe some of this land could be turned over for residential or commercial use. We could sell that off and help finance some redevelopment.”

Any major decisions, however, are further down the road. First, the city needs the framework document from the consultant, which should be finished by year’s end.

“Then any developer would need some time to kind of digest it, but knock on wood, a year or two from now we may be seeing some demolition and some rebuilding taking place,” Zimmerman said.